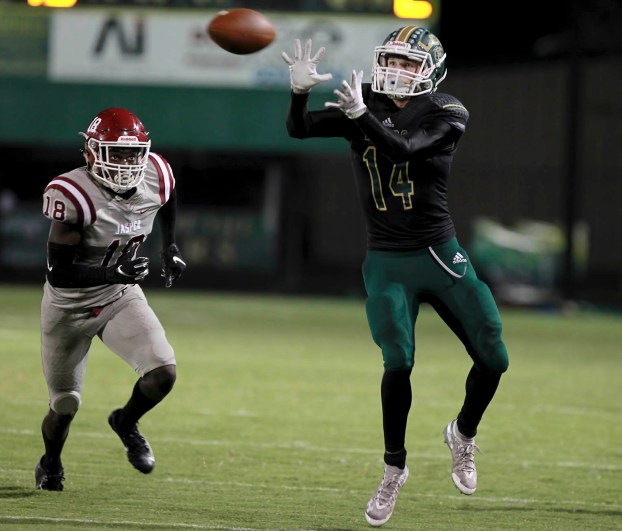 LITTLE CYPRESS – Behind the legs of senior tailback Montavien Hunt, the Jasper Bulldogs racked up 420 yards on the ground Friday night to down the Little Cypress-Mauriceville Bears 42-14 at Battlin’ Bear Stadium.

Hunt rushed for 264 yards on 14 carries and scored two touchdowns. Fellow Bulldog back Carl Limbrick had 105 yards and two touchdowns on 15 carries to aid the arsenal.

LC-M senior quarterback Ethan McCollum put together both LC-M scores on quarterback keepers. He completed 12-of-28 passes for 152 yards and rushed for 59 yards on 24 totes. Receiver Brandon Pollock had five catches for 66 yards.

The Bulldogs made some big plays to take a 28-7 lead going into the half.

Jasper opened the game with some pop when return man Reggie Shaw took the opening kickoff back all the way for a 90-yard touchdown. Alex Mijares booted the extra point to put the Bulldogs up 7-0 with 11:47 in the first quarter.

The Bulldogs got on the board on their first offensive possession as they navigated 54 yards on five plays.

Hunt had three carries for 36 yards and the burly Limbrick capped it with a eight-yard touchdown blast with 9:26 in the first quarter to make it 14-0.

The Bulldogs scored their third touchdown of the first quarter when Hunt finished off a eight-play, 52-yard drive by going three yards around left tackle to push it to 21-0 with 0:31 left in the period.

Bulldog defensive back Terrien Collins picked off a McCollum pass at the Jasper 40 and returned it to the Bear 39 and Limbrick scored again one play later when he zipped to the end zone on a 39-yard gallop to make it 28-0 on the last play of the first quarter.

LC-M defensive back D.J. Williams picked off a deep pass by Bulldog quarterback Trashawn Adams at the Bear 14 with 9:27 in the half.

The Bears then showed plenty of grit as they marched 86 yards in 14 plays to hit paydirt.

McCollum hit receiver Seth Carpenter on a crucial 13-yard pass on a fourth-and-5 play from the Bulldog 43 that kept the drive alive. McCollum then found receiver Pollock on a 19-yard strike down the left sideline to the 11 and McCollum earned it on the next play as he split up the middle of the Bulldog defense for an 11-yard touchdown run with 3:04 in the half.

Hunt ripped off 42 yards on his next two carries to get the Bulldogs deep in LC-M territory. However, the Bear defense would rise up and stop Jasper on fourth-and-1 from the Bear 2 in the final seconds of the half.

McCollum completed 6-of-18 passes in the half for 54 yards with Pollock catching four for 52 yards. McCollum also had 52 yards on 12 carries.

Hunt put the Bulldogs up 35-7 with 9:10 in the third quarter when he scooted 87 yards for a touchdown.

Brashaun Hubbard scored on a one-yard touchdown run for the Bulldogs with 3:52 in the third after Hunt went on a 54-yard down to the 1.

The Bears put together a solid 10-play, 59-yard drive to score near the end of the game. The big play of the series was a 27-yard pass play from McCollum to D.J. Spears along the right side that got to the Bulldog 12. Three plays later McCollum found the end zone from three yards out with 0:16 remaining.

The Bears will venture to Vidor, a 48-0 winner over Caney Creek Friday, next Friday while Jasper will visit Livingston.

By Caleb Adams The Orange Leader   ORANGEFIELD — The Orangefield Bobcats toppled the Shepherd Pirates 27-21 in a close... read more