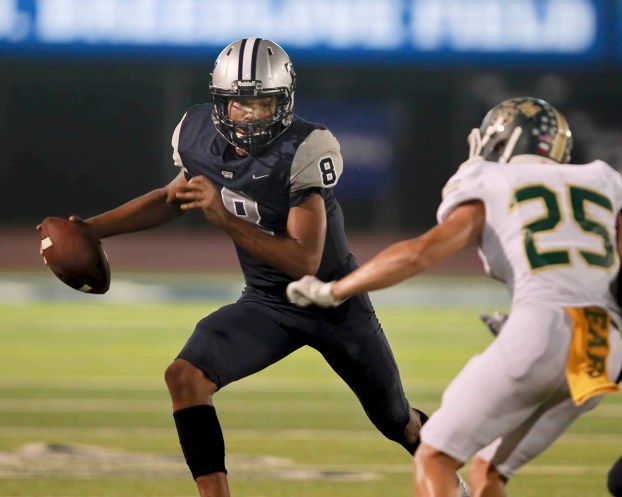 Mustangs heading to 3A power Newton

WEST ORANGE – Two long-time powerhouses will get after each other again this week as the West Orange-Stark Mustangs will make a stout road trip to Newton to tangle with the two-time defending Class 3A Division II state champion Eagles.

Both teams have started the season with 2-0 starts as the Mustangs defeated Nederland 21-20 and Little Cypress-Mauriceville 36-14 while the Eagles have strolled past Kirbyville 76-0 and Silsbee 52-21.

The Mustangs used a stout ground game to turn back LC-M last week as they piled up 351 rushing yards on 45 carries. Sophomore tailback Elijah Gales notched 223 yards and four touchdowns on 23 carries, flourishing behind a veteran offensive line.

Through two games, the Mustangs are averaging a solid 373.5 yards a contest, 278.5 of it via the ground game.

Gales has 346 yards and five TDs on 39 carries through two games. Ja’Marcus Ross has 63 yards on six totes and a score while Jayson Ziegler has 61 yards on 13 carries.

The Eagles will come soaring into the game with a high-powered multiple wing offense that gained over 500 yards against Kirbyville and almost 500 more against Silsbee. Six starters return from the state champion team.

The Eagles are loaded at running back with Kevin Watson, DeAnthony Gatson, Zach Gulley and Val Fowler along with quarterback Dom Seastrunk. Dre Shawn Spikes and tight end Bryce Westbrook are reliable in the passing game.

Though they don’t have a lot of depth, as usual, the Eagles have been stiff on defense with All-District linemen Spikes and Michael Clark and a All-District secondary featuring Seastrunk, Watson and Gulley.

This will mark the 10th meeting between the two powerhouses with WO-S leading the all-time series 7-2. Newton has won two of the last three meetings, including a 21-7 mudfest at Hooks Stadium last year.

Newton outgained the Mustangs 325-223 as Newton running back Darwin Barlow, now at TCU, rushed for 152 yards on 20 carries and had a 95-yard touchdown gallop.

The Mustangs will return home next week to play host to Crosby. Meanwhile, the Eagles will have their bye week next week before visiting Gilmer Sept. 27.