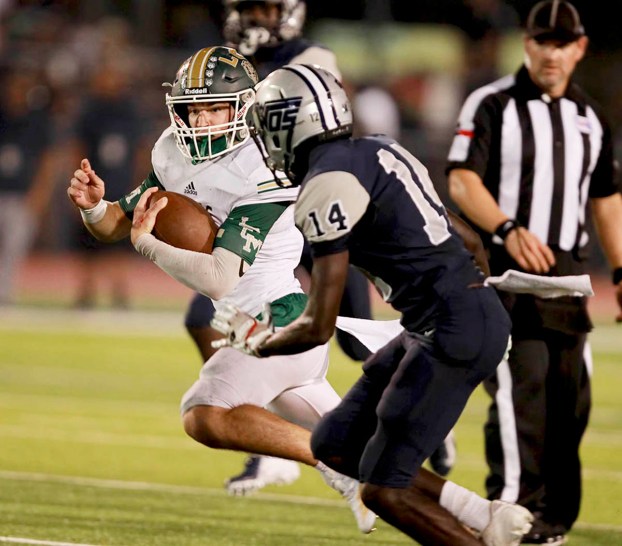 LITTLE CYPRESS – Facing their second highly-ranked Class 4A Division II team in a row this week, the Little Cypress-Mauriceville Battlin’ Bears will look to bounce back when they welcome in the Jasper Bulldogs to Battlin’ Bear Stadium Friday.

The Bears (1-1) have split their first two battles, downing Woodville 21-7 in their opener before falling to West Orange-Stark 36-14 in last week’s Orange Bowl encounter.

Meanwhile, the Bulldogs (1-0) ran past Bridge City 65-14 last week after their season opener against Lumberton was cancelled due to bad weather. The Bulldogs have won 13 of their last 14 games.

The Bears battled WO-S hard for four quarters last week and will look to do the same against a high-powered Jasper running attack.

The Bears are definitely sparked by senior quarterback Ethan McCollum. McCollum has completed 20-of-38 passes for 260 yards and two touchdowns and he has rushed for 135 yards and a touchdown on 28 carries.

H’s had an array of receivers to get the leather too, including Brandon Pollock, D.J. Williams, Seth Carpenter and D.J. Spears. Williams had three catches for 79 yards against WO-S last week.

Tailback Landon Bearden has 76 yards on the ground for an offense that is averaging 235.5 yards a game.

Defensively, the Bears are allowing 328.5 yards a game as they will look to bounce back defensively after they allowed Woodville just 224 yards in their opening win.

The Bulldogs certainly had their ground game churning in the win over the Cardinals last week as they gobbled up almost 500 yards of total offense, despite having 18 penalties for 180 yards.

Back Montavien Hunt is definitely the Bulldogs’ bellcow. He rushed for 1,514 yards and 20 TDs last year and had 121 yards on just five carries against the Cardinals.

Limbrick, a bruiser, had 677 yards last season and had 109 yards on six totes against the Cardinals.

Bulldog quarterback Trashawn Adams completed 7-of-9 passes for 130 yards against Bridge City and has two excellent receivers in the forms of Bryce Barbay and Nolan Smith.

Last season the Bulldogs notched a 46-6 home victory against the Bears as they totaled 416 yards and held the Bears to 165.

The Bears will venture to Vidor next week to face the Pirates while the Bulldogs will hit the road again to battle the Livingston Lions.

Bobcats will try to sink Pirates

ORANGEFIELD – There is no place like home and the Orangefield Bobcats have certainly enjoyed the start to their season... read more