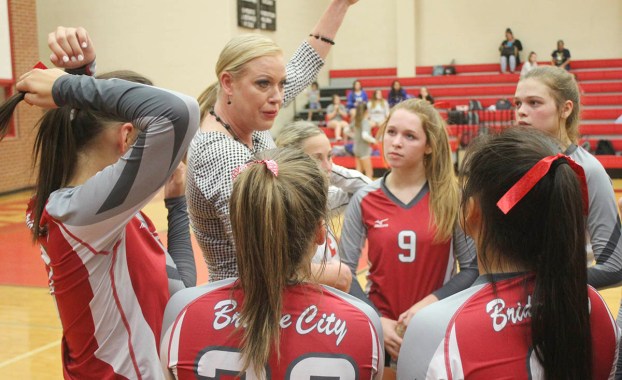 BRIDGE CITY – A young Bridge City Lady Cardinal volleyball unit battled their hearts out Tuesday night in their District 22-4A volleyball opener, rallying from two games down against Hamshire-Fannett but it was the Lady Longhorns that had the final answer in Game Five as they escaped Cardinal Gym with a tight 25-22, 25-22, 20-25, 20-25, 15-12 victory.

Every game was tight. The Lady Cardinals actually led Game Five 12-10 only to watch the Lady Longhorns slip away with the match’s last five points to seal it.

The Lady Cardinals actually had more kill shots on the night than the Lady Longhorns as they held a 56-46 advantage, but H-F used a tough service game throughout and may key plays late in both the first two games to hold on.

Shawnee Craigen powered all H-F hitters as she piled up 22 kills. Kylea Buchanan had 10 kills for the Lady Horns while Emma Tully had six and Shaylee Sonnier five.

Waverlee Cooper set up the BC offense well all night and led the way with 16 service points and an ace.Kyndall Harrison had nine points and a team-high four aces. Emma Gaspard had eight points while Tupper and Doiron added six points apiece.

Game One was close throughout but the Lady Longhorns tallied the last two points to take it.

BC rallied to tie Game Two at 22-22 but the Lady Horns ripped off the last three points.

The Lady Cardinals returned the favor in Game Three by taking the last three points to stay in the hunt.

The Lady Cardinals looked to dominate Game Four and they did early, sprinting out to a 19-8 margin. H-F fought back to get as close as 23-20 before the Lady Cards sealed it with the final two points.

The Lady Cardinals will look to bounce back Friday when they visit Silsbee.

Lady Bobcats down Lady Mustangs in 3