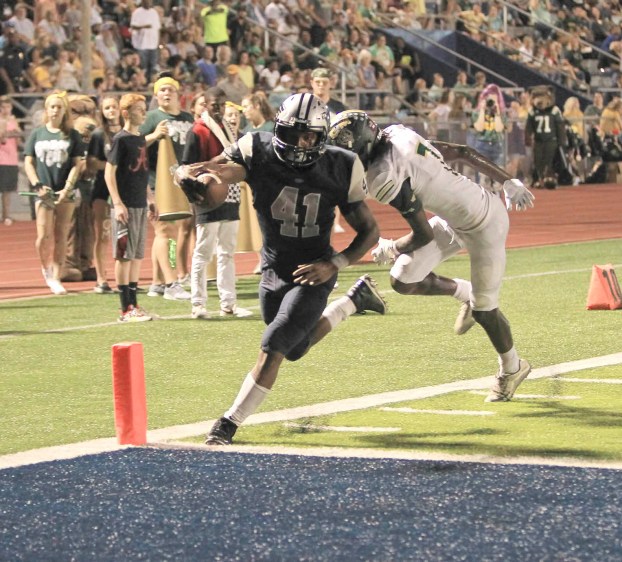 Mark Pachuca/Orange Leader WO-S running back Elijah Gales heads into the end zone for one of his four touchdowns against LC-M Friday night.

WEST ORANGE – Utilizing the legs of sophomore tailback Elijah Gales behind a dominating offensive line show and a stifling defense in the second half, the West Orange-Stark Mustangs defeated the Little Cypress-Mauriceville Battlin’ Bears 36-14 to take their 30th win in 32 tries against their Orange County rival in the Orange Bowl at Hooks Stadium Friday night.
Gales shredded the Bears for 223 yards and four touchdowns on 23 carries.
The Mustangs (2-0) totaled 433 yards. They picked up 351 yards on 45 carries on the ground.
WO-S quarterback Jerren Terrell completed 10-of-18 passes for 82 yards. Mustang back Ja’Marcus Ross added 55 yards on four carries and a score.
The Mustangs limited the Bears (1-1) to 169 total yards and just 36 in the second half.
Bear quarterback Ethan McCollum completed 10-of-19 passes for 135 yards with D.J. Williams catching three passes for 79 yards. The Bears only mustered 34 yards on 22 rushing attempts.
Taking advantage of a short field on their first series of the second half, the Mustangs went 43 yards in five plays to find the end zone.
Gales carried three times for 32 yards, including a seven-yard touchdown blast up the middle. The Mustangs missed the PAT but led 20-7 with 9:55 in the third.
The Bears returned the favor swiftly with the legs of D.J. Spears, who took the ensuing kickoff and found a lane on the right side and took it to the house from 88 yards out to trim it to 20-14 with 9:38 in the third.
The Mustangs countered with a 10-play, 55-yard scoring drive.
Gales split the Bear defense for 33 yards on five carries and scored on a four-yard touchdown blast up the gut to make it 26-14 with 4:53 in the third. Terrell had a big 22-yard pass to Artavious Samuel on the march.
Spears then returned the next kickoff 63 yards to the WO-S 35 but the Mustang defense held firm and stopped the Bears on fourth down.
Gales broke open the game again when he broke three tackles and then hit the right sideline for a 52-yard romp to the end zone to push it to 33-14 with 11:19 left.
The Mustangs capped off a 50-yard drive with a 37-yard field goal by Angel Ibarra with 5:39 remaining.
WO-S led 14-7 after a competitive first half.
The Mustangs chewed up 4:27 off the clock, utilizing 12 plays to navigate 60 yards to get on the scoreboard.
Gales chewed up 37 yards on five carries on the march. Terrell hooked up with Chavon Crawford on a big nine-yard pass on fourth-and-7 from the Bear 26. Gales ripped off 13 yards on two carries and Ja’Marcus Ross capped the drive off with a four-yard dart up the middle.
Angel Ibarra booted the extra-point as WO-S grabbed a 7-0 edge with 7:33 in the first quarter.
The combination of McCollum and receiver Williams helped the Bears move deep into WO-S territory on the Bears’ first series.
They teamed up on a perfect 50-yard strike over the middle that got down to the Mustang 31 and they got together again on a 13-yard dart that got to the Mustang15. The Mustang defense rose up though and LC-M kicker Robby Wedel was short on a 39-yard field with 3:15 in the first quarter.
The Bears cashed in on a Mustang turnover to tie the game up early in the second quarter.
Mustang receiver Jayson Ziegler hauled in a nine-yard pass from Terrell but fumbled it away at the Bear 13 to LC-M’s Spears, who returned it all the way to the Mustang 47 with 11:02 in the half.
The Bears would find paydirt eight plays later.
Bear back Landon Bearden broke open for a 19-yard burst to the 20 and McCollum found Williams again on a 16-yard completion that went to the 7. Three plays later McCollum threw a seven-yard touchdown dart to Brandon Pollock and Wedel booted the extra-point to tie it at 7-7 with 7:39 in the half.
The Mustangs bounced right back, going 62 yards in 11 plays utilizing the legs of Gales.
Gales carried four times for 43 yards on the series and caught a 14-yard pass. He capped it with a sprint around the right side for a 18-yard touchdown gallop to push it to 14-7 with 2:23 in the half.
The Mustangs outgained the Bears 187-133 in the first half.
Gales had 95 yards on 12 carries while Terrell was 5-of-11 for 48 yards.
McCollum completed 5-of-8 passes for 100 yards with Williams hauling in three catches for 79 yards.
The Mustangs face a stout road trip next week when they visit two-time defending Class 3A Division II state champion Newton while the Bears return home to tangle with a formidable Jasper Bulldog unit.

By Ronnie Hughes The Orange Leader   ORANGEFIELD – The Orangefield Bobcats made it look easy Friday night as they... read more