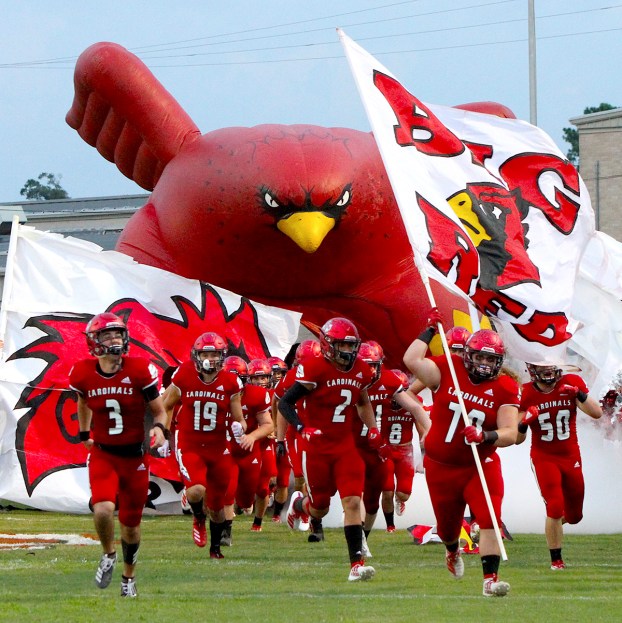 The Bulldogs (1-0) took control early in this game and never looked back, and didn’t give the Cardinals a chance offensively early.

Bulldogs running back Carl Limbrick had the most yards on the ground with 110, and MonTavien Hunt was right behind with 104 of his own. The Bulldog offense would amass 333 yards on the ground, the big difference maker for the Bulldogs team. Jasper outgained BC 443-202.

Bridge City (0-2) had a 100-yard rusher as well. Andy Lara would rush for 104 on the night, including a long 71-yard run in the first half. The Cardinals would have 163 total on the ground, Lara gaining the majority of that alone.

The Bulldogs would come out fast paced and ready to score on any play, and the first drive made that obvious.

After stopping the Cardinals on the first drive, the Bulldogs only need one play to find the game’s first points. Hunt found a hole inside the left tackle and never stopped. A 55-yard touchdown for the Bulldogs and a Alex Mijares PAT made it 7-0 with 9:25 left in the first quarter.

The Bulldogs found the end zone again, but this time it took a few more plays. Carl Limbrick got a lot of the yards , including his touchdown run. Limbrick found a hole and was off to the races for a 39-yard touchdown to bring the score to 14-0 Bulldogs with just over six minutes in the first quarter left.

The Cardinals found their first points thanks to a big run by Lara. Lara bounced to the left and found some room to the sideline, he would be caught at the 6 for a 71- yard run. The Cardinals wouldn’t find the end zone, but kicker Oscar Carranza easily put away a 27 yard field goal as the Cardinals trailed 14-3 with 3:23 left in the first quarter.

Jasper responded with another scoring drive in the first quarter. Tarshawn Adams would find a nice pass to Bryce Barbay for 39 yards. Limbrick would finish the drive with a three-yard run for the touchdown to make it 21-3.

The Bulldogs continue to score with another one-play drive. After an opportune punt return the Bulldogs started on the BC 20.. Limbrick would find a hole to the left of the offensive line and run in for the touchdown making it 28-3.

The Cardinals put together a long 16-play drive to score just before the half ended. Bridge City would take advantage of multiple Bulldog penalties for free first downs. Ocegueara would find JT Fielder and Jake Potter for first downs. Lara, Dorian Pruitt and Ocegueara combined on the ground to get the Cardinals to the Bulldog 32. Carranza would drive through the 42-yard field goal to make the score 28-6 Bulldogs with 11 seconds left in the first half.

The Bulldogs score again, but this time it didn’t take any offensive plays. Reggie Shaw would return an 80 kickoff to the house to make it 34-6.

Jasper had another quick drive, ending in another rushing touchdown from Limbrick. Starting from the Cardinals 44, the Bulldogs ran their way down to the three yard line for Limbrick to punch it in making it 41-6 with 10:50 in the third.

The Bulldogs piled on even more with a long 36-yard touchdown pass from Trashawn Adams to Nolan Smith making it 48-6 with 8:46 in the third.

The Cardinals weren’t going to give up, as a QB scramble from Oceguera scored their first touchdown of the night by putting together a solid drive starting from the 25-yard line. Oceguera would get a few passes off to extend the drive and multiple scrambles for first downs. The Cardinals pushed to the 5 setting up the Oceguera five-yard run into the end zone., making it 48-14 with 2:13 in the third.

Jasper was held to a field goal on their next drive from 42 yards out by Mijares.

Jasper’s Limbrick finds another long run for a touchdown mid-way through the fourth quarter. After a penalty by the Bulldogs, Limbrick found a hole he could work with and took it to the house for a 45-yard touchdown.

The Bulldogs would add to their lead with another big run from Ketavion Hadnot for a 31-yard touchdown.

The Cardinals will hit the road for the first time next week when they visit the Anahuac Panthers while the Bulldogs will head to LC-M to face the Bears.