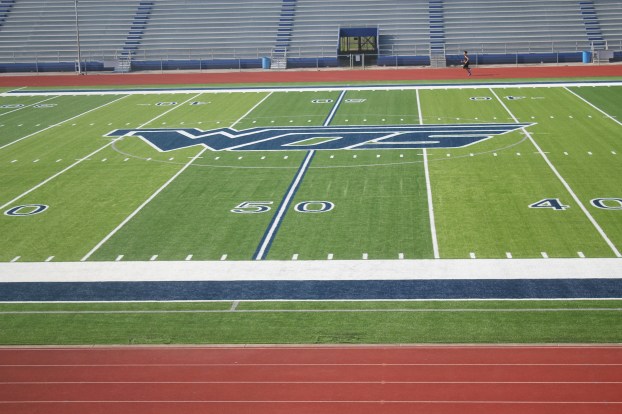 WEST ORANGE – After picking up a nice pair of victories to open their 2019 campaign, the West Orange-Stark Mustangs and the Little Cypress-Mauriceville Battlin’ Bears will duke it out once again in the Orange Bowl Friday night.

It will mark the first official game at Hooks Stadium and Breedlove Field in which the Mustangs are hosting a game on their new turf field.

Both teams got a little revenge last week against their two opponents as well after falling to them in their season openers last year.

Meanwhile, the Bears (1-0) had a tremendous performance in stopping Woodville 21-7 after falling to the Eagles 40-8 last season.

The Mustangs jumped on Nederland 14-0 and then trailed 20-14 before getting a 16-yard touchdown run by tailback Elijah Gales with less than five minutes remaining and the game-winning extra-point by Angel Ibarra.

The Mustangs coughed up three fumbles to the Bulldogs during the battle but the Mustang defense had several crucial stops to turn back the Nederland offense.

WO-S held a formidable Nederland offense to 278 total yards, 207 of it coming on the ground.

The Mustangs piled up 306 total yards on offense in the victory.

Gales zipped through the Nederland defense for 116 yards and a touchdown on 16 carries. Jayson Ziegler notched 49 yards on eight totes.

Mustang quarterback Jerren Terrell passed for a score and ran for another. He completed 10-of-13 passes for 108 yards and rushed for 15 yards on four carries.

Receiver Artavious Samuel hauled in three receptions for 64 yards while tight end Shemar Manaway had three catches for 29 yards and a touchdown.

The Bears controlled their game with Woodville pretty much through the entire contest.

Woodville could never quite get its vaunted running game going against a LC-M defense that flew around all tight.

The Bears limited the Eagles to just 224 total yards and Woodville had just 123 rushing yards on 44 carries.

LC-M picked up 302 total yards behind the guidance of senior quarterback Ethan McCollum.

Tailback Landon Bearden rushed for 58 yards on 14 carries and a TD while receiver Seth Carpenter hauled in three catches for 59 yards and a TD.

The Mustangs lead the all-time series 29-2 after last season’s 47-0 victory.

The Mustangs outgained the Bears 518-78 and Terrell completed 9-of-11 passes for 198 yards and three touchdowns.

The Mustangs will make a huge road trip next week to face two-time defending Class 3A Division II state champion Newton while the Bears will return home to face a talented group of Jasper Bulldogs.

BRIDGE CITY — The Bridge City Cardinals want to find a way to get back on the winning track this... read more