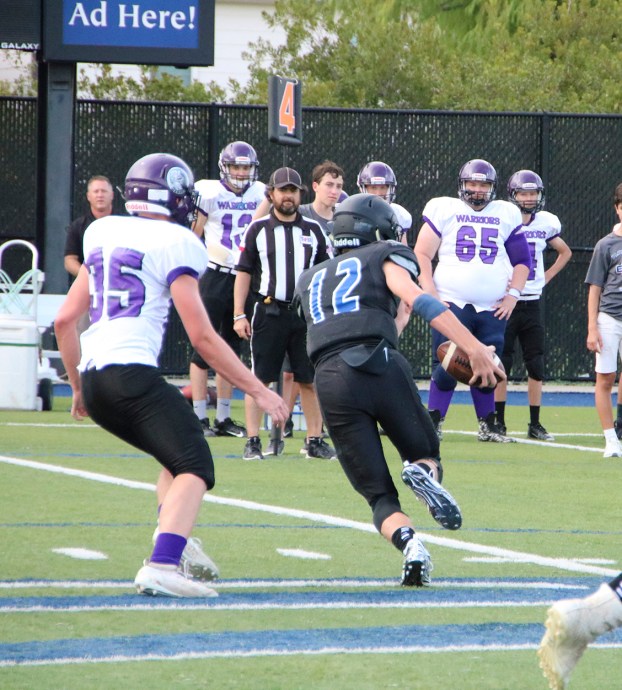 Under the leadership of their new head coach  Bryan Rawlins, the Lions put an impressive 75 points on the scoreboard. However, they came up short on a last second touchdown by the Warriors ending with a 81-75 loss.
This very young talented Lions team showed so much heart on the field. Freshman Isaac Rizzato established himself as a weapon scoring two touchdowns and gaining multiple first downs as well as playing defense. Unfortunately, freshman Landon Hassler,  who launched  himself as the go to running back was lost for the season due to a broken foot in the third quarter. Newcomer to the Lions Sophomore Bryer Gray set himself up as a big help on offense and defense. Freshman Taylor Hogan proved that he was the best choice for center as he worked on offense and defense.
On our veteran squad, Levi Rogers, a 6’7” offensive and defensive lineman showed that he was a threat by not only making a fumble recover, but by receiving two touchdowns and dominating the trenches. Junior Quarterback James Menard had a stellar performance by rushing for six touchdowns, passing for five more and showing that the Lions primarily freshman squad is a serious threat.
Coach Rawlins’ first year as head coach is showing that his expertise in offense and extraordinary work ethic will help this young small Lions team compete. “Building a program is about helping the athlete to achieve their greatest potential on and off the field with a focus on building their character through Christ” says Rawlins.
The Lions homecoming game against Sanchez is Friday Sept. 6th at 5:30 pm at Stewart Field.

By Ronnie Hughes The Orange Leader   NEDERLAND — The most anticipated week for football fans arrived Friday night, with... read more