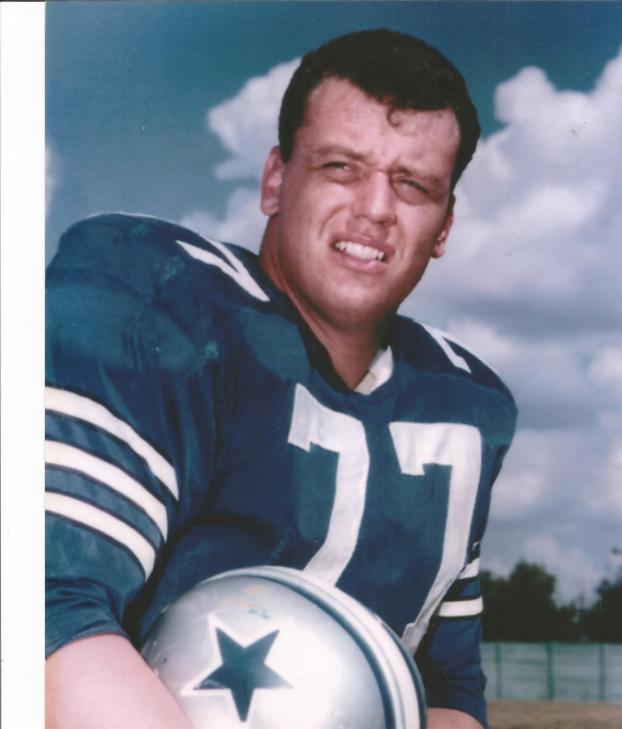 James Reginald “Jim” Colvin, 81, of Uvalde, Texas, passed away Friday, August 30, 2019 in Uvalde.  He was born in Monahans, Texas on November 30, 1937 to James Walton and Virginia Jones Colvin.  Jim attended Lutcher Stark High School in Orange, Texas where he was a football player and graduated in 1956.

Jim attended The University of Houston on a football scholarship.  During his football career at the UH he was honored as an All-Missouri Valley Conference player for his junior and senior seasons and was an All-American Honorable Mention as a senior.  Jim was drafted by the Baltimore Colts in the 1959 draft.  He played defensive tackle for the Colts from 1960-1963, the Dallas Cowboys from 1964-1966, and for the New York Giants in 1967.

After retiring from the NFL, Jim owned several new car dealerships in Texarkana, Tx, Abilene, Tx, and Sweetwater, Tx.  Jim had many other business ventures throughout his career before he retired to Uvalde, Tx to be near his family.  After his retirement, Jim enjoyed his family and grandchildren and all of their activities.

Jim is preceded in death by his parents Jim and Virginia Colvin and his daughter Raquel Colvin Dixon.

He is survived by his son Jim Colvin and his wife Tracy of Uvalde, Tx: grandchildren, Shelby, Tres, Carly Rae, and Brazos Colvin of Uvalde, Tx.: Son-in-law Kevin Dixon of Midland, Tx: Friend and ex-wife Judy Colvin of Abilene, Tx.  He leaves behind a multitude of family and friends to cherish his memory and many entertaining life stories.

A memorial service will be held at Rushing-Estes-Knowles Mortuary at 220 S. Getty, Uvalde, Tx 78801 on Wednesday, September 4, 2019 at 2:00 p.m.  In lieu of flowers, please consider a donation to the Uvalde County 4H Horse Club, 122 Veteran Lane, Uvalde, Tx 78801, or the The American Foundation for Suicide Prevention – North Texas Chapter, www.afsp.org .