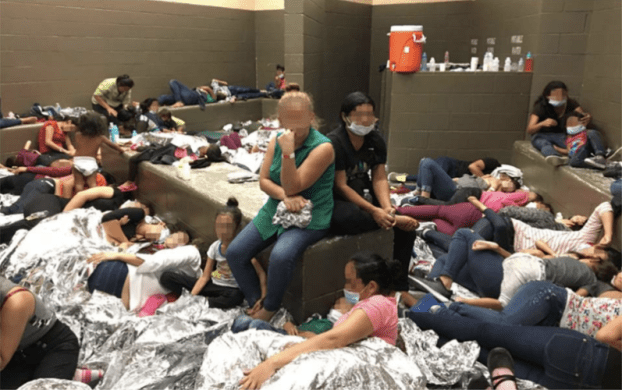 Photo courtesy of DHS Inspector General The Department of Homeland Security says a "remain in Mexico" policy has reduced overcrowded conditions for asylum seekers in the U.S.

TX volunteers frustrated as migrants are trapped in Mexico

EL PASO, Texas – Volunteers who have been helping desperate migrants arriving in El Paso say they’re frustrated to see those people now being forced to stay in Mexico.

The Trump administration pressured the Mexican government to stop migrants before they can ask for asylum in the U.S.

Teva Gabis-Levine volunteered to coordinate for Annunciation House, a temporary shelter in El Paso. He says there are as many as 15,000 people – mostly central Americans – now backed up in desperate conditions in Juarez.

The Trump administration defends the conditions asylum seekers face, saying they will discourage others from trying to come to the U.S.

Gabis-Levine says Annunciation House went from sheltering as many as 1,000 new people a day last winter to seeing 100 or fewer per day.

He says it was a stretch, but volunteers there could at least help people get on their feet and, within a few days, head out around the country to meet up with sponsors. He says he was impressed with how ordinary people stepped up to make that happen.

“Folks who brought shoes for people who were dropped off without shoes,” Gabis-Levine relates. “Making peanut butter and jelly sandwiches and assembling bags that we would send folks on their journeys with.”

Annunciation House was described as “the Ellis Island of the southwest border” in the Los Angeles Times newspaper.

Gabis-Levine says in Mexico, the migrants are subject to far worse conditions and live under the threat of serious violence. He says it’s hard for him to watch.

“After this occupying every waking moment of my life for six months, it’s emotionally very difficult to know that that’s happening a stone’s throw away and not really being able to do anything about it,” he says.

By Dawn Burleigh The Orange Leader   Carissa Slaughter and Brendon Hoffman each received a scholarship through the Orange Community... read more