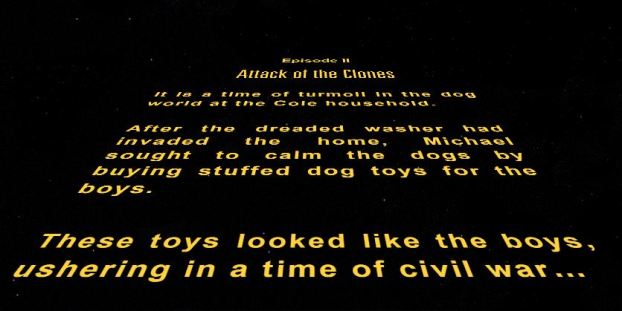 Story Over a Cup: Episode II: Attack of the Clone Puppies

Not so long ago, in a neighborhood really close to you…

It is a time of turmoil in the dog world at the Cole household. After the dreaded washer had invaded the home, Michael sought to calm the dogs by buying stuffed dog toys for the boys.

These toys looked like the boys, ushering in a time of civil war…

Sometimes we make choices that were done for the right reason, but the results were disastrous.

Like the time I killed my sister’s fish while she was gone, and tried to buy one that looked exactly like it. I spent $20 on it, so she would never know that hers had died.

Only to come back and see the fish. Her words were, I was kinda hoping he would pass while I was gone. Come to find out it was a gift from a now ex, and she didn’t want any reminders.

I had that fish for another five years. But, me and Walter had fun. Well, as much fun as a man and Betta Fish can have.

But, back to my current problem. The boys and their obsession with the washer.

I was still finishing the hookups in the kitchen, but would soon move the dryer there as well.

Seeing how the boys have tried biting it, barking at it, one peed on it, and ran from it; it was going to be a repeat with the dryer.

So I needed a distraction. My thoughts: chew toys.

Now, my dogs are fickle when it comes to chew toys. I bought them all $8 rubber tire looking toys that they never looked at twice, only to have their favorite ones to be plastic bottles. They don’t like the dog ropes but will steal my socks.

So, I was taking a chance when I bought three stuffed dogs.

Setting them on the floor, I stepped back.

Three heads immediately zoned in on the stuffed dogs.

Bill looked at them with mostly indifference. I think once he decided they were not plastic and were not alive, he did not care. For the moment.

He looks like a cross between a Lab and a Pit. Unfortunately, he hasn’t the bravery of either. He will bark at anything that moves, only to run away from plastic bags. He is about 80 pounds of stomach and heart and about two ounces of brains.

He looked at them with suspicion.

Roswell. I have said if ANY dog was aptly named, it was him.

He took one look at them and you could see the crazy wheels turning in his head. He growled, barked, and attacked.

He grabbed a stuffed dog toy and immediately set to disemboweling it. He was shaking one in his teeth, growling, dropping it, and starting all over again.

His brothers took that as a sign and jumped the other two.

Cotton and material were flying everywhere while I was trying to rescue what was left.

Finally, there were the remains of three stuffed dogs. A head here, a leg there.

Roswell was looking at me, his eyes and grin said one thing: “This will happen again  if you ever bring clones here again.”

For a brief period, there was peace and order in the house…

Yet a shadow was looming…

My Five Cents School: districts have received report cards of their own

Robert Nichols As students dust off their backpacks these last few weeks and head back to school, Fall is definitely... read more