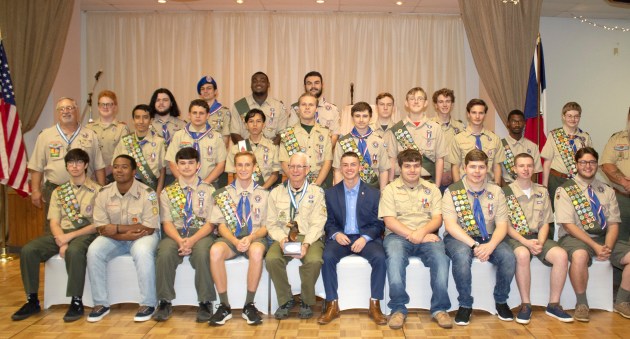 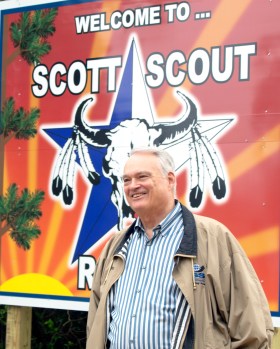 Photos courtesy of Three Rivers Council Boy Scouts of AmericaBill Scott at the Grand Opening of Scott Scout Ranch in April 2019. Scott, TransGlobal Solutions, Inc. Chairman/CEO and Eagle Scout, says Scouting helped build his character and self-discipline and taught him leadership skills, time management, and that you can alwaysdo more than you think you can.

BEAUMONT, Texas —  Boy Scouts of America Three Rivers Council is celebrating its 100th anniversary in 2019. The Beaumont-based non-profit serves both boys and girls and has been the premiere youth organization in Southeast Texas since the early 1900s.

In 1918, the Beaumont Rotary club invited Stanley Harris, National Scoutmaster of the Boy Scouts, to speak about Scouting. Impressed by Harris’s speech about Scouts, it was decided that Rotary President Henry Keith should organize a council locally.

One of the greatest strengths of the local council is the unique and long-standing collaborative partnerships it has formed with business, industry, community, education, labor, and religious

Scouting provides programs for young people that build character, trains them in the responsibilities of participating citizenship and develops personal fitness. These programs

change lives and build them into productive citizens and strong leaders.

“Scouting was a character and self-discipline building exercise for me,” said Trans-Global Solutions, Inc. Chairman, CEO and Co-Owner Bill Scott, who is an Eagle Scout from Port Arthur

and continues to be a key supporter of the local Council. “Being chosen by my Scouting peers as Senior Patrol Leader when I was 15 and 16 years old instilled in me leadership principals that have lasted me a lifetime. In order to achieve the Eagle Scout rank, I had to learn to manage my time, create a plan and then work the plan. Balancing my Eagle Scout goal with high school

sports and making my grades in school was one of the first real challenges I faced in life. I learned from Scouting and sports that you can always do more than you think you can and

quitting in life is just not an option. I don’t think I can overstate the importance of the self-esteem and drive to succeed that Scouting engendered in me in my formative years.”

Each year between 55-80 Scouts earns the Eagle Scout Award -Scouting’s highest rank a youth can achieve. It is not easily earned. Eagle projects must be sustainable, benefit the community, and involve more than 100 hours of work.

“Somebody asked me how many Eagle Scouts we’ve had in our 100 years. My best approximation is 4,000,” said Les Bentley, Scout Executive of Three Rivers Council. “That’s equivalent to 10 Eagle Scouts – working 19 years each – on doing nothing but Eagle projects – which are all community improvements. That is amazing!” Les continued “We have thousands of youth reciting the Scout Oath and Scout Law on a weekly basis. The Scout Law is: A Scout is Trustworthy, Loyal, Helpful, Friendly, Courteous, Kind, Obedient, Cheerful, Thrifty, Brave, Clean, and Reverent – twelve words to live by and change lives.”

Eagle Scouts only represent 4% of Scouting. Many Scouts do not advance to Eagle Scout Rank, but all Scouts perform service projects each year for the benefit of Southeast Texas.

The 1,500 registered adult volunteers provide over 8.5 million dollars’ worth of service a year.

That figure does not include the thousands of community service hours the 4,300 youth provide the community and their sponsoring organizations.

Unlike what many may believe, Three Rivers Council does not receive funding from the government, registration fees, or the national Boy Scout organization. The council must fund

itself each year through local community support. 13% of the budget is provided by three local United Way organizations; the other 87% is funded through community fundraising campaigns and events. One of the largest fundraisers is the Distinguished Citizens Dinner, scheduled for Tuesday, Sept. 24 at the Beaumont Civic Center. Keynote speaker for the event is Mark “Oz” Geist, member of the Annex Security Team that fought the Battle of Benghazi, Libya, and co-author of the bestselling book 13 Hours: The Inside Account of What Really Happened in Benghazi.

The Three Rivers Council utilizes available resources to support its 125 community partners and respective units. The local council owns and operates a Scout Service Center and a 730-acre camp just south of Woodville, “Scott Scout Ranch,” to provide a quality and safe camping facility for the Scouts.

Statistics show that Scouting not only positively affects the individual involved in the program but the entire community. Research conducted by Louis Harris & Associates shows that Scouts take better care of the environment (89%); get along with others (88%); always give your best effort (87%); have confidence in yourself (87%); set goals for yourself (87%); care for other people (86%) and treat other people with respect (86%). In addition, Scouts are more likely to assume leadership roles in clubs and school organizations; put the needs of others before themselves; make the most ethical, not necessarily easiest, decisions and value education and the environment.

lives,” Bentley said. Getting youth outdoors, active, and engaged in their community with their parent or guardian is key to transforming lives. Scouting is a unique program that requires active participation from both child and parent, but the benefit is well worth the commitment.

“It’s much easier to sit and watch a TV and keep your child occupied by giving them a tablet and never interacting with them,” Bentley said. “By doing this you never give them the traits and characteristics you want them to have as an adult. We’ve got to get families back together again, and I feel Scouting can help us achieve this.”