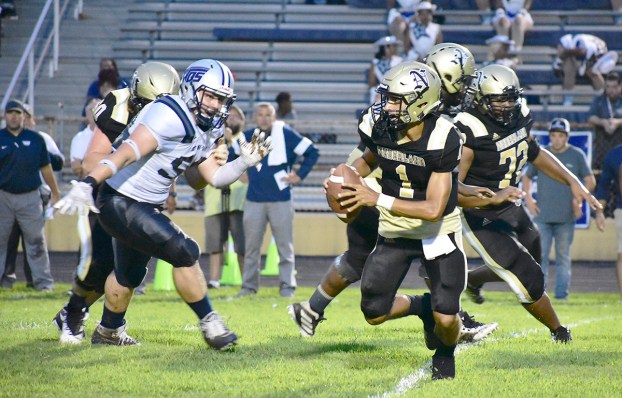 NEDERLAND — The most anticipated week for football fans arrived Friday night, with the Nederland Bulldogs hosting the Mustangs of West Orange-Stark.

A fresh-look Mustangs squad downed the Bulldogs, 21-20 on the back of sophomore running back Elijah Gales’ 128 yard and two-touchdown performance.

The Bulldogs opened the game at their own 35. A speedy Mustangs defense quickly sent the Bulldogs in search of their punter. The Mustang offense got things going early with Jayson Zeigler Jr. ripping off a 13 yard run followed by a big-time hookup from quarterback Jerren Terrell to Artavious Samuel for 36 yards. Gales capped the quick drive with a two-yard trot into the end zone to boost the Mustangs out front, 7-0, with just over eight minutes left in the first quarter.

Nederland opened their second possession with Bryce McMorris hitting Kyndon Fuselier for a 21-yard pass over the middle. Unfortunately, the momentum was short lived, and the Bulldogs again would punt back to WO-S. The Mustangs marched a few yards back following a few bad snaps to go three-and-out; sending the ball right back to the Bulldogs.

Shemar Manaway and Steven Wilkerson both picked up sacks on first and second downs putting the Bulldogs with a third and long situation. The Mustangs received the ensuing punt at their own 20. Following two Bulldog sacks, Terrell would find Zeigler Jr., for a 17-yard pass on third and 16 to keep the Mustang drive alive. Terrell seemed to have found his zone hitting Samuel for another 16-yard pass then capping the drive with a 17-yard touchdown pass to tight end Manaway. Following the extra-point, the Mustangs pulled further ahead of the Bulldogs, 14-0, with 8:11 remaining in the first half. The Mustang offense tallied178 yards in the first half while allowing just112 yards to the Bulldog offense.

The Nederland offense finally found some breathing room in the Mustang defense. Kade Scott exploded up the middle for big back-to-back runs as the Mustang defense seemed to run out of steam. Josh Mazyck capped the drive, flying off the right side for a Bulldog touchdown from 39 yards out. The Bulldogs trailed the Stangs’, 14-7, at the end of the first half. Mazyck notched 127 yards and one score for the Bulldogs.

The Bulldog fans came alive following the score as the Mustang offense seemed to be on shaky ground following the turnover. Two bad snaps by the Mustangs contributed to a quick three-and-out on the ensuing possession.

Nederland kept with their ground game that wore down the WO-S defense. Big runs by Scott pushed the ball out past midfield for Nederland before Mazyck ripped off another big run for 40 yards off the right side. Scott polished off the Bulldog drive with a two-yard touchdown just one play later. Nederland led 20-14 heading into the final quarter of play. Scott finished the night 71 yards and one touchdown on 12 totes for the Bulldogs.

The fourth quarter breathed fresh air into the Mustang offense after a turnover and penalty-plagued third quarter that handed the lead to the Bulldogs. It would be Gales that ignited and extended the drive to start the fourth quarter. Following a huge pass interference by the Bulldog defense that set the Mustang offense up inside the red zone; Gales took off while toeing the right sideline, leaped over one defender while extending the ball over the goal line for what would be the game- winning score. The Bulldogs would exhaust all their timeouts in efforts to scrape by the young Mustang squad, but time was not on Nederland’s side as WO-S was able to run out the final two minutes.

The Mustangs will prepare for their home opener against, Little Cypress-Mauriceville, next week. Nederland will regroup and hit the road to take on Beaumont United in a non-district matchup in week two.