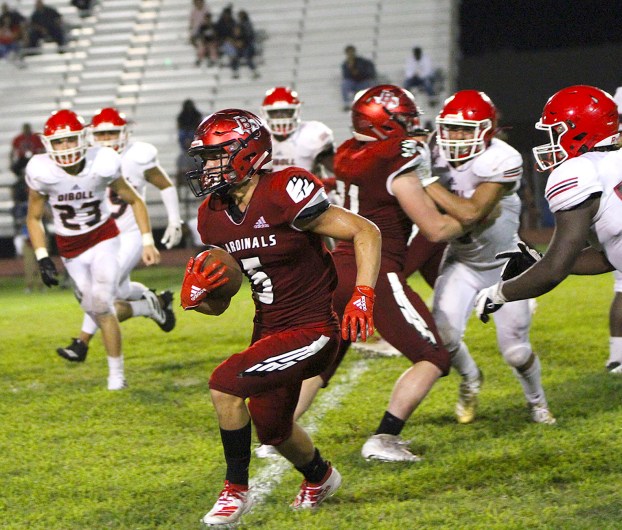 The kinks of the Cardinals’ new offense showed themselves throughout this game.

Throughout the first half the Cardinals had trouble getting a drive started, or finding a first down in general. Their new offense has a few kinks left in the machine before it goes the way the Cardinals (0-1) would hope.

The Cardinals elected to receive to open the game, but the Lumberjacks had other plans. The Lumberjacks onside kicked and recovered to begin the game.

Running back Daris McMillan gained 12 on the ground for the drive to set up quarterback Dylan Maskunas, who found McMillan for a 15-yard touchdown pass after getting advantageous positioning on the first drive. Adrian Garcia put the PAT through to make it 7-0 with nine minutes left in the first quarter.

After a couple of Bridge City failed attempts to get the ball moving, Diboll increased their early lead. Maskunas would find Albro for a nice first down to start the drive for Diboll, mixing it up from previous drives. McMillan, the workhorse for the team, found a hole in the Bridge City defense after the big pass and ran for a 26-yard touchdown. Garcia made the PAT and Diboll lead 14-0 to end the first quarter of play.

Mid-way through the second quarter, the Lumberjacks found the end zone again thanks to Chase Tamez. Maskunas would break open the drive with a 29-yard QB run. McMillian would get 12 on the ground before Tamez would finish the drive for the Lumberjacks from the one yard line as the Lumberjacks led 21-0 with just under seven minutes left in the first half.

The Cardinals found their first points of the game with just under four minutes left to play. After a 21-yard penalty against the Cardinals, they had the majority of the field to cover starting at their own 19. A mixture of Andy Lara and Dorian Pruitt on the ground moved the ball nicely for the Cardinals. From around the 30 yard line quarterback Ethan Ocegueara launched one to Blake Moore in the end zone for the score. Oscar Carrazna put the PAT up to make it 21-7 in the fourth quarter.

The Lumberjacks didn’t take long to respond to the Cardinals score. McMillian and Javaughn Luster account for all the yards on the four-play drive. McMillian broke for a 26 yard run, Luster caught a 16 yard pass to setup another McMillian touchdown from the 6. The PAT would be no good, but the Lumberjacks lead 27-7 with 2:20 left to play.

The Cardinals showed signs late that the offense could click and create points, but the Lumberjacks had their number. The defense was in the backfield on nearly every play as soon as the ball snapped. The occasional big pass play or run didn’t come often enough for the Cardinals.

On the other hand the Cardinal defense did improve as the game went on. The second half was a lockdown for most of the time. The potent Lumberjack offense of the first half struggled to find the same groove. The silver lining for the Cardinals is there is a lot to improve on and a lot of places to get better.

Next week the Cardinals face the Jasper Bulldogs next Friday at home. Jasper’s game with Lumberton Friday night was canceled due to lightning and rain.