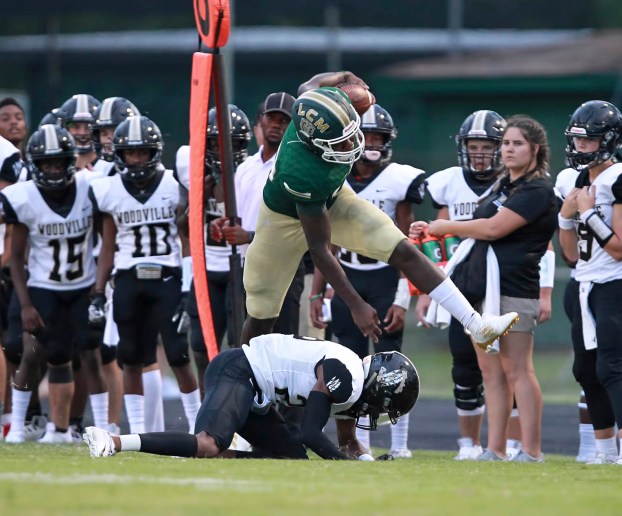 McCollum completed 10-of-19 passes for 125 yards and a touchdown and rushed for 119 yards on 15 carries and another score. His 50-yard touchdown gallop with 0:29 remaining sealed the deal for the Bears.

LC-M running back Landon Bearden had 58 yards on 14 carries and a TD while receiver Seth Carpenter had three catches for 59 yards and a score. The Bears finished with 302 yards.

Woodville quarterback Kaden Young completed 5-of-13 passes for 101 yards but was picked off twice. Eagle running back Keon Chapman, a 1,000-yard rusher last year, was limited to just 48 yards on 18 carries.

LC-M controlled the entire first half in outgaining the Eagles 219-103.

McCollum completed 7-of-13 passes for 94 yards in the half and rushed for 73 yards on nine carries.

Bearden zipped for 52 yards on eight carries in the first 24 minutes.

The Bears struck gold early in the second quarter with a sparkling five-play, 57-yard scoring march.

On second-and-13 from the Eagle 31, McCollum spotted a wide-open Seth Carpenter, who was all by himself as he scooted easily into the end zone for the 31-yard pitch-and-catch. Robby Wedel booted the extra-point to give the Bears a 7-0 edge with 9:57 left in the first half.

The Bears wasted little time the next time they had the leather after taking over with a short field at the Eagle 40.

McCollum had two big carries that netted 23 yards and Bearden finished it when the Bears opened up a big hole as he darted straight up the middle for a 10-yard touchdown dart to make it 14-0 with 5:26 in the half.

Woodville had only one nice sustained drive in the half, moving from its own 16 to the Bear 28 late in the half but LC-M’s Carson Peet picked off a Young pass at the Bear 5 with 0:48 left and returned it to the 17.

Young completed 3-of-7 passes in the half for 54 yards.

The Bears moved the ball well in the first quarter, outgaining the Eagles 122-34 but did not come away with any points.

LC-M’s first drive went 32 yards but stalled at the Eagle 26.

LC-M later moved the ball from its own 5 all the way to the Eagle 17 but Woodville was able to hold after three straight incompletions.

LC-M’s D.J. Spears picked off a Young pass at the Bear 26 and returned it to the Woodville 42 with 8:57 in the third. The Bears got to the Eagle 14 where the drive stalled.

The Eagles were able to get on the board late in the fourth after taking over on a short field at the Bear 25 with 3:31 remaining. Young found back Kevon Paire on a 24-yard pass that got to the Bear 1. Three plays later Chatman got into the end zone from the 1 to trim it to 14-7 with 1:38 remaining.

However, McCollum sealed the game up when he broke loose for a 50-yard touchdown gallop, breaking several tackles with 0:29 left.

The Bears will make a short trek to WO-S next week for the Orange Bowl.