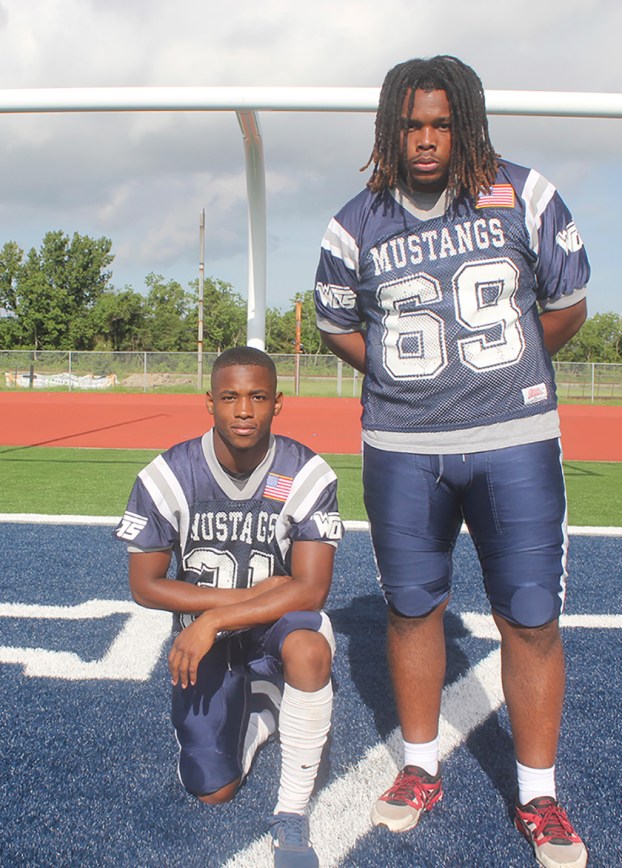 Van Wade/Orange Leader West Orange-Stark’s Ja’Marcus Ross (left) and Quincy Ledet look to have big seasons for the Mustangs as they chase another district title.

WEST ORANGE – Entering the 2019 season, the West Orange-Stark Mustangs have a Patriot’s-like mindset on how they want to approach each week throughout the season.

The Mustangs finished their 2018 campaign 9-5 overall and 4-0 in District 10-4A Division II, taking the district title and marching into the playoffs.

After beating Huntington, Sweeny and Jasper the Mustangs were tripped up and offensively shut down by Silsbee 19-9, in the fourth round of the playoffs.

Senior running back Ja’Marcus Ross believes the biggest thing the Mustangs learned from the Silsbee loss, and the season overall was getting your mind ready.

“The biggest thing I learned is you really have to have your mind ready before we play,” said Ross. “We have to really be ready to play.”

Building on each season, for offense or defense, is key to taking steps to improve. Ross believes a few key parts of the offense have improved over the offseason for the Mustangs,

“Our offensive line is great and got even better,” said Ross. “Our quarterback (junior Jerren Terrell), he’s young, but he’s really smart.”

After getting some playing time after Tyrone Wilson had an injury, Terrell showed he has what it takes to run an offense. Coach Cornel Thompson seemed to agree by giving him the starting quarterback job heading into this year.

Defensively the Mustangs’ work on the field usually always speaks for itself. Each year presents another opportunity for them to make another historical run into the playoffs like a freight train.

Senior defensive tackle Quincy Ledet Jr. says coming into the season ready to win is a major key for the team.

“We always come into the season hungry,” said Ledet. We are always trying to, I guess you could say, trying to break records and shut everyone out.”

Watching the Mustang defense, when they are clicking, is a thing of beauty. Everyone on the field has a goal each play and often they succeed at that goal. Trying to shut down the opposing offenses.

Ledet also said he doesn’t have many personal goals, he’s just ready to get out on the field.

“I really just want to do my part for the team,” said Ledet. “But a few sacks hear and there would be good.”

Both Ledet and Ross had the same answer when asking who they are looking forward to playing this year. Everybody. They are just ready to get on the field and prove how good they really are.

Depth-wise the Mustangs are feeling confident about their young talent coming up this season, “There’s a lot of young guys who could make it, but they are just going to have to play, we’ll see.,” said Ross.

WO-S is known for being historically great for as long as anyone can remember here in Orange County. Ross, Ledet and the rest of the Mustangs are on a mission for another district title and deep run into the playoffs, with hopes of another state title.

By Caleb Adams The Orange Leader   ORANGEFIELD – The Orangefield Bobcats, who finished 5-5 overall and 2-5 in District... read more