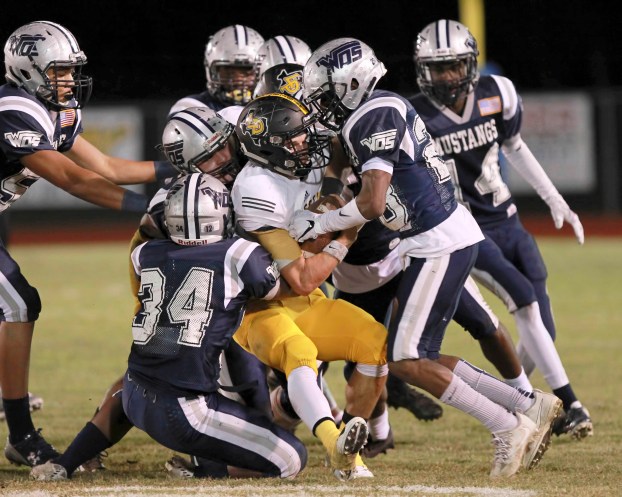 Mark Pachuca/Orange Leader WO-S defenders converge on a Liberty back during 10-4A action last season.

Mustangs gearing up to chase another district title

WEST ORANGE – There is always excitement about the upcoming season at West Orange-Stark for its fans, not only from the present but past as well.

They love to see streaks continue and this year’s version of the Mustangs would love to keep some of them going.

“There is no question we’ve had a great run here over all the years and so many people think the Mustangs just reload every year,” said Thompson. “That’s far from the case. Every year is a new year and some fresh new faces that have not played on Friday nights yet. We’ve got a lot of young guys that will be learning on the fly that are wet behind the ears but it’s a fun group to coach and the coaching staff has really enjoyed them thus far.”

Thompson likes how the Mustangs entered the first couple weeks of practice.

“The kids came in here in really good shape, probably in better shape then they have been in the last two or three years,” said Thompson.

Coach Thompson likes the experience the Mustangs have in some spots but looking for major growth with inexperience in other spots.

“I really think our offensive line and defensive line is our strength going in with us bringing back good experience there,” said Thompson. “However, we are definitely worried about the receivers and our secondary. We’ve got a couple solid guys back but we also have a ton of inexperience and those guys are going to have to pick up the pace to improve.”

After getting a handful of starts last season, junior quarterback Jerren Terrell will look to guide the Mustang offense.

He completed 36-of-85 passes for 515 yards with eight touchdowns and six interceptions.

“Jerren has made some nice strides after last year and the experience he got was very valuable,” said Thompson. “He’s tall, has a good range of motion and has a nice arm. He should be a much better runner this season. We’re excited to see what he can do.”

Jason Ziegler will be the likely backup at quarterback.

The backfield will have some experience back with the likes of Elijah Gales, who had 449 yards and five TDs on 48 carries and Ja’Marcus Ross, who had 302 yards and four TDs on 46 totes. Jaqualion Chaney and Hykiem Taylor will also see their share of touches.

“With Ja’Marcus and Elijah, we know what they can bring, which is speed,” said Thompson. “The thing, though, with all of our backs, is that they are small. We’ve got to get our whole group of backs to learn how to protect and block better.”

The Mustangs will definitely be young and inexperienced at receiver.

Chavon Crawford, who played some there last year, returns along with Andre Thomas.

“We hope to get a lot out of those two guys,” said Thompson. “Crawford has shown us some good things early on and has great hands. We’ve just got to be able to find some depth there and it’s been tough early.”

The offensive line is definitely a strength with the return of starters Quincy Ledet, Jordan Garrett, Darby Jones and Courtney Davis with Demetrius Hunter, Steven Wilkerson and Shemar Manaway, who will play at tight end some, providing some nice depth.

“It all starts right there,” said Thompson. “You can move the ball if you can’t move what is in front of you and I feel like we’ve got some guys that do that.”

The Mustangs should be stout on the defensive front as well with the return of All-District noseguard Wilkerson and Al-District tackle Manaway (61 tackles, four sacks) along with Ledet and Davis.

At linebacker, Al-District pick Tyrone Brown, who made 131 stops a season ago, along with Ross, bring back a slew of experience while Gales and Jalen Thompson return as solid defensive end anchors.

“Overall, we’re pretty pleased with what we have going for us in the defensive trenches and at linebacker,” said Thompson. “The think we need to find the most is depth at some of those spots. We don’t want to have guys going both ways the whole game.”

It’s the secondary that Thompson wants to see improve weekly with players that don’t have a ton of experience.

Patrick Mickey, Jubar Ross, Artavious Samuel and Thomas have been getting looks at cornerback while Jasachin Harris, Jadon Jones and Samuel have been seeing time at safety.

The Mustangs should be one of the top teams in their district in the kicking game.

Placekicker Angel Ibarra led the Mustangs in scoring a season ago with 66 points. He booted 10 field goals and nailed 36 extra points and Paulino Santos will return as the punter.

“Those two have been around and know what it’s about,” said Thompson. “We’re pleased we don’t have to worry about that.”

Nice depth at all of the positions would certainly help the Mustangs out during a grueling schedule as the staff will be looking at some young guys to fill some gaps as the season progresses.

“At the 4A Division II level, there is no doubt about it, you have to play kids on both sides of the ball,” said Thompson. “But you don’t want to see that for the entire 48 minutes. We’re looking for some of those young guys to step in early and not be so wide-eyed on Friday nights, and play some nice roles for us.”

There is also no doubt that the Mustangs have a formidable non-district schedule with the likes of Nederland, LC-M, Newton, Crosby, Bridge City and Jasper. Plus you can’t discard two physical scrimmages with PN-G and Vidor. Every school with the exception of Newton, last year’s 3A Division II state champion, has much higher enrollment numbers than WO-S.

“One thing for sure, going through a gauntlet like that, you find out where you’re weaknesses are really quick,” said Thompson. “That’s a very tough non-district and I would stack it up against anybody’s in the state. It’s just so dang hard for us to find six non-district games every realignment and it will be tough again come February.”

The last team to topple the Mustangs off the top of a district perch were the Tigers in 2009 when they defeated the Mustangs 13-7 in Silsbee.

The Mustangs defeated the Tigers in a 24-21 nailbiter to win the 10-4A title a season ago.

‘Without question going in, Silsbee should be the district favorite, not only based on them beating us in the playoffs but with what they have coming back,” said Thompson. “They have three 1,000-yard backs returning along with a very good quarterback. They are loaded on offense and we have to go to there place. Honestly, I think the district as a whole is going to be much better. We have to go to Liberty and that’s no easy chore because they are always so physical and have tremendous athletes. Hamshire-Fannett played really well for Coach (Mark) Waggoner last year and will be better with a ton of kids back and you can never count out Hardin-Jefferson.”

Once again, Coach Thompson wants to take it one step at a time and that begins with the season-opening trip to Nederland Friday night.

“Expectations will always be high here with all of the success we’ve had,” said Thompson. “We just want the kids to look what is ahead of them from week to week and avoid any type of hype and rankings. We just want to go out and look to get better each week and stay healthy, especially through a six-game non-district schedule. District is a long ways off, we just want to get better and we think this is a really good group to coach up.”

By Caleb Adams The Orange Leader   WEST ORANGE – Entering the 2019 season, the West Orange-Stark Mustangs have a... read more