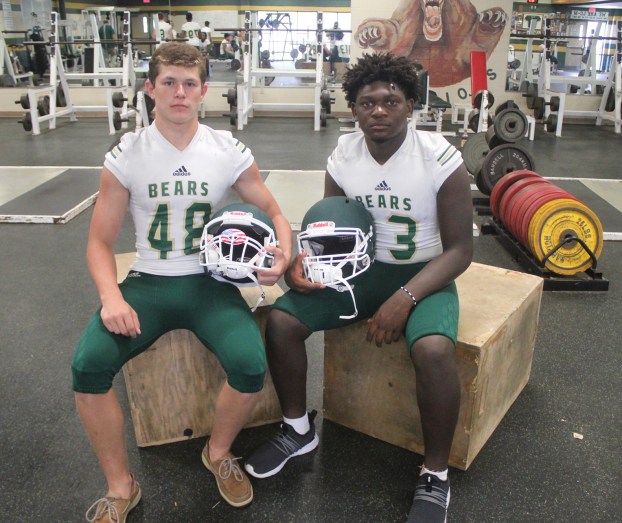 LITTLE CYPRESS – Last season ended with hopes dashed for the Little Cypress-Mauriceville Battlin’ Bears, who faced a few tough injuries, a couple of tough loses during district, and a first round playoff loss to Navasota 38-7.

The Bears ended the season 4-7 and securing the third-place heading into playoffs after a 3-2 record in District 11-4A Division I.

Playoffs have come regularly for the LC-M program, but the Bears remain on a quest to secure their first postseason win since 1997.

This season, according to senior quarterback Ethan McCollum, with about 20 players returning there’s a lot that was learned.

“A lot of the players have gotten more experience,” said McCollum. “We work better as a team now and getting things to roll better now.”

Offensively the Bears got better as the season went on, and this season they plan to use a similar offensive plan. McCollum says head coach Randy Crouch keeps it simple for the players.

“It makes it easier since we are doing basically the same thing,” said McCollum. “Just a few changes, keeps it simple and keeps it easy for us.”

In the same tone, the defense is feeling confident with a lot of young players last season returning. Senior linebacker Matthew Lopez says they learned a lot from their early struggles last season.

“We learned from our mistakes the best we could, you could see it in the second half of the season compared to the first half,” said Lopez. “We were just a younger team, so as the season went on we started to get it together.”

Lopez says he’s ready to get back at the tough opponents, starting with a cross town rival.

“In the second week of the season, I’m ready to give the Mustangs (WO-S) a run for their money,” said Lopez. “ Those guys have been great for so long and playing them can only help make you better.”

Along with their early struggles in the season, McCollum went down with an injury during week two against Jasper. He had this to say about who he looks forward to playing the most this season, “Man, I’m ready to play every team,” said McCollum. “I didn’t get to play several teams at all last year so I’m ready to get to it this year.”

McCollum also took the offseason to work on fully recovering from his injury.

“Every day I was working out, and I found something else to do if I didn’t do that,” said McCollum. “Just trying to make myself better every day.”

The word around town is out, and Lopez agrees.

“It’s great to get Ethan back healthy and he’s worked so hard to get himself back in shape,” said Lopez. “I think he’s going to be a big star for the team, he played so huge for us when he was a

Ultimately the Bears goal this season will be to not only make the playoffs but take that elusive first playoff win since 1997. The Bears and McCollum believe they are right at the doorstep and need to just follow one key principle.

The Bears come in to the 2019 season with a lot of hope and promise from within the locker room. The young players from last season who are returning in key positions are ready to take that next step.

August 30th will be the first test for this McCollum-lead Bears team this season against Woodville. Their schedule is very similar to last season, facing the Mustangs, Jasper, Vidor and Hardin-Jefferson before heading into the tight district they have ahead.

The Bears have the potential to battle for the top district spot, but the big question can’t be answered until they hit the field and will hopefully avoid any major injuries through five non-district games.