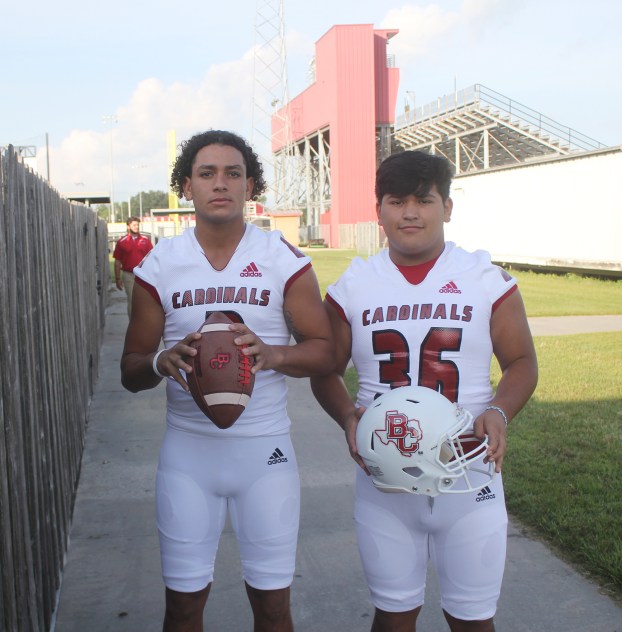 Van Wade/Orange Leader Bridge City’ seniors Jackson Tims (left) and Andy Lara look to be strong leaders for the Cardinals as they look forward to the 2019 campaign.

BRIDGE CITY — Year one was tough for the Bridge City Cardinals and first-year coach Allen DeShazo in 2018 with a slew of injuries and playing some very young players. .

But after a year of learning, a few adjustments and a new uniform, the Cardinals are looking to bring back the winning ways to Bridge City.

With 13 starters back and Coach DeShazo’s newly implemented Multiple-I offense, the team is looking to attack other defenses with a flurry of different playmakers across the field.

Last season the Cardinals went 2-8 overall and 1-4 in District 11-4A, missing out on the playoffs for the second year in a row.

One of the glaring issues was the offense not finding the end zone nearly enough, scoring 112 points, less than half the amount given up by the defense, 332 points. The new offense will give the Cardinals more opportunities to get the ball down the field without relying on slight of hand from the Slot-T they had been running.

Senior fullback and returning starter Andy Lara believes the new offense will do a lot to help the Cardinals.

Lara, when talking about the young weapons the Cardinals are looking to take advantage of this season, is excited. Included in that young group is sophomore Ethan Oceguera, starting quarterback for the Cardinals this upcoming season.

“I think it’s going to separate the defense more, give us more running room and open up other weapons to get more yards,” said Lara. “Blake Moore is really fast and quick, and Austin Richardson has pretty good hands and both can really be great receivers.”

Along with the young talent coming, the Cardinals also have solid talent returning this year. With the amount of running backs the Cardinals used in previous years with the Slot-T offense, there’s no shortage of people who can run the ball for the team.

On the defensive side, the Cardinals are looking to the linebacker group to really step up this season. One of the returning members of that crew is senior Jackson Tims. Last season the Cardinals struggled to keep offenses at bay late, losing control of games.

This season Tims thinks the answer is simple to fix their woes.

“We really just need to fly to the ball, everybody be on the same page and just know what we are trying to do,” said Tims.

Tims also believes that the linebackers have what it takes to get the job done this season and one in particular he sees having a good year,

“Garret Ashworth,” said Tims. “He’s really been working hard this offseason to improve, and I see him having a good year.”

On a personal level Tims has plans to step up as a leader for the defense.

“I just wanna step up more, be more of a leader on the defensive side, and tell my guys if they are doing something wrong, to do it right,” said Tims.

As a team the Cardinals aren’t looking for any one opponent specifically, they are just ready to play.

“We just want to win every game and take it one game at a time,” said Lara.

Bridge City is on a quest of redemption after the disappointing 2018 season. With the offseason ending the Cardinals have been busy restructuring their offense to be the best they can hope for. There are a few big tests including West Orange-Stark, Silsbee and Jasper early in the year in non-district for the Cardinals to really see how their new offense works. The first of those tests is August 30th against Diboll in Bridge City.

Cardinals ready to soar high in wide-open 11-4A

BRIDGE CITY – After a two-year absence from the playoffs the last two seasons after going through tough injuries, getting... read more