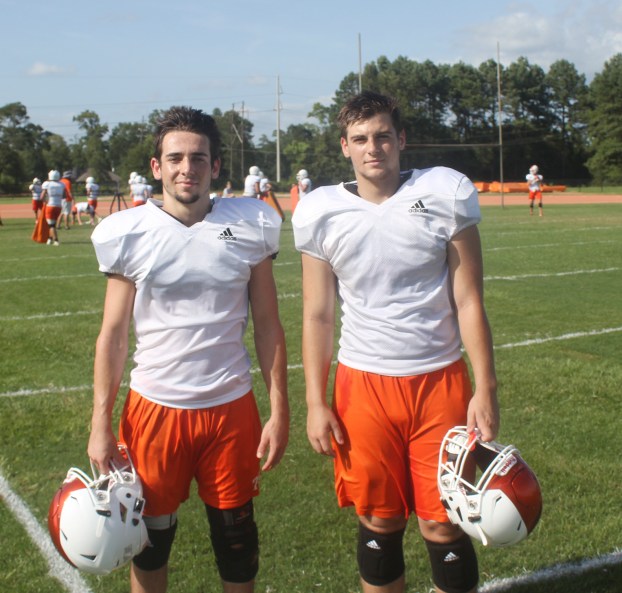 Caleb Adams/Orange Leader Orangefield’s Clayson Choate (left) and Gunner Jones will be two key cogs for the Bobcats this season as they will look to claw their way to the playoffs.

ORANGEFIELD – The Orangefield Bobcats, who finished 5-5 overall and 2-5 in District 12-3A Division I, missed the playoffs last year after setting high expectations to perhaps roll in the district and run head first into the playoffs, with hopes of a deep run.

The hope remains the same heading into this season, learning from the tough losses to teams they expected to beat.

Orangefield’s football season begins with the same goal as last season, to make the playoffs and hopefully take the district title with it. In comparison to last year the district is even more wide open, if the Bobcats can beat some of the teams who gave them troubles last season.

Orangefield coach Josh Smalley has 16 returning starters, eight on each side of the ball, which means there are a lot of players who were able to learn and build on the mistakes of last season.

Clayson Choate, senior running back and safety for the Bobcats, says the team learned a harsh but age-old lesson last season.

“We can’t underestimate any team and a couple of teams we went in thinking it would be an easy win,” said Choate. “Anahuac, Hardin and Buna all came out on top last year and we just underestimated them. That shouldn’t even be an option, to be beat by them.”

Choate also explained what the key for the Bobcats will be heading into the season.

“We just need to get a better mindset, be prepared to win,” said Choate. “Not that it’s an easy game. And it doesn’t start the day of the game, it starts the week before the game.”

Offensively the Bobcats found success early in the season with three giant wins, but as district started up the team had trouble finding the end zone as often as they’d like.

“We just have to keep it going,” said Jones. “After the first half of the season we lost some of our energy in the second half. We just have o keep up that energy and carry that out throughout the whole season.”

Jones also mentioned how the team has improved since last season,

We have more speed than we did last year,” said Jones. “So we’re looking to quickly and physically go through everybody this year.”

On the defensive side the Bobcats are looking to take a couple steps forward after last season and adding some much-needed depth.

Choate believes that the secondary has improved this season and should make an impact on the field,

“Last year we didn’t have a lot of depth, this year we have some kids coming up that can help the players who play both ways get more time on offense.,” said Choate.

When asked about who he is looking forward to play this season, Choate had this to say.

“Buna and Harden definitely,” said Choate. “Those are big losses for us. Hardin was at home and by two points, I mean we shouldn’t have lost that. And Buna, it’s just kinda salty about Buna, it’s just such a big rivalry game for us.”

As far as the schedule for the Bobcats goes, they do get the benefit of seven home games out of the possible 10, which can create the opportunity to build a train of momentum heading towards the post season. The Bobcats will have many tests throughout the season, as every team does.

The best teams find ways to get through those tough late game situations and win. The season kicks off with KIPP Generations Collegiate in Orangefield on August 30th.

Bobcats ready to bounce back in 12-3A play

ORANGEFIELD – There is no question that the Orangefield Bobcats are just chomping at the bit to get their 2019... read more