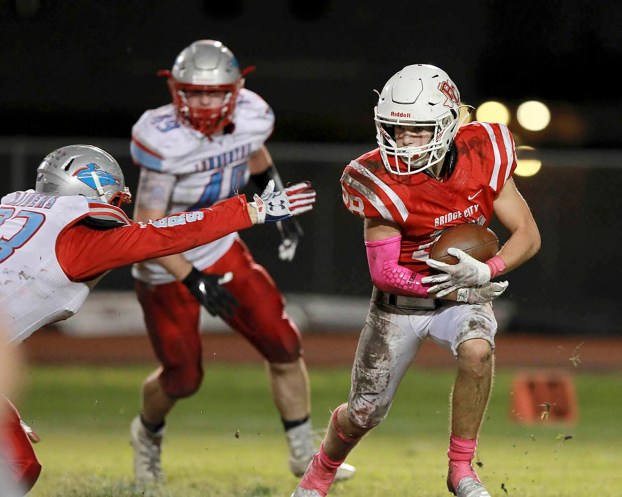 Cardinals ready to soar high in wide-open 11-4A

BRIDGE CITY – After a two-year absence from the playoffs the last two seasons after going through tough injuries, getting use to a new head coach, and playing a ton of young players a season ago, the Bridge City Cardinals have high aspirations entering the 2019 campaign for second-year head coach Allen DeShazo.

The Cardinals finished 2-8 last year and 1-4 in a tough District 11-4A Division I district but they kept battling and Coach DeShazo and his staff were able to get a glimpse of a tough, hard-nosed young group of players that fought hard, including several freshman that took the varsity field a year ago.

“Last year was tough at times but I think we gained so much from it,” said DeShazo. “The experience our young kids gained is really paying off right now. Looking back on it, it was hard to believe we had six freshman that started varsity games for us and four sophomores. They realized quickly that the speed of the game is so much different on Friday nights then on Thursdays.”

Bridge City welcomes back 13 starters, five on offense and eight on defense, as they look to make waves towards a playoff push.

The Cardinals will be changing their offense up, leaving the Slot-T and transitioning into a Multiple-I offense.

“We feel we have a lot more weapons this year and we have more speed and depth than we’ve had in the past and we want to spread the ball around,” said DeShazo.”

Ethan Oceguera, who was kind of a jack-of-all-trades for the Cardinals as a freshman last season, looks to move in at quarterback.

“Ethan played his heart out for us last year and you would’ve never known he was a freshman,” said DeShazo. “He played a lot on defense and moved in at running back for us and gained 185 yards against district champion Splendora. He’s still just a sophomore and he’s going to make some sophomore mistakes, but he has all of the intangibles and he’s the type of kid that likes to lead.”

Jackson Tims and Colby Collins will look to back up Oceguera while also being busy at other positions.

“It’s great to have those two kids back,” said DeShazo. “If we can keep them healthy, they can really be a nice 1-2 punch.”

Fleming, the district 100-meter champion, looks to make an impact after going through two ACL surgeries.

“It’s good to have George back, you gotta love it when you have a 10.78 100-meter guy and we feel he can help us in several areas,” said DeShazo.

When the Cardinals put the ball in the air, look for receivers Blake Moore and Austin Richardson along with Jake Potter and to make plays along with tight ends Tims and J.T. Fielder.

“We definitely want to open the offense more because we have more speed this year then we’ve had in awhile,” said DeShazo. “We want to get the ball into as many different hands to keep defenses honest, instead of lining up in the box and expecting the run.”

Trent Roccaforte will play a key role in the offensive line after nice experience last year. Braydon Little will return at center. Also expected to make an impact in the trenches includes Sheldon Becker, David Burton and Aidan Clarke.

Junior Oscar Carranza, who was solid last year, will once again handle the kicking and field goal duties and DeShazo said he had a great summer going to kicking camps and has been consistent from beyond 40 yards while Oceguera will handle the punting chores.

The Cardinals will look to improve vastly on defense with plenty of experience returning to the mix.

The linebacker group is stout with the return of Jackson Tims (82 tackles, three sacks), Garrett Ashworth (55 tackles), Dorian Pruitt and Ply. Fleming and Trey Hebert will also factor in as well.

“We definitely like our group of linebackers,” said DeShazo. “They can all fly to the football. We like the depth we have there because all of those guys are factors on offense too.”

Kevin Ross returns to help anchor the defensive line along with the likes of Lara, Little, Burton and Cody Howard.

“We like what we have on defense, we’re pretty speedy and experienced,” said DeShazo. “The big key this year is to not make mistakes. A lot of times last year we gave up huge plays on third downs by simply not wrapping up. With the experience we have now, we shouldn’t have to worry about that as much.”

The Cardinals will look to prepare themselves for a rugged 11-4A district by playing a stout non-district slate for the second year in a row.

“I would argue with anyone about us possibly having the toughest non-district schedule in the state,” said DeShazo. “Just look at playing Jasper, Silsbee and WO-S alone, those three teams are all ranked in the top five in the Class 4A Division II state poll. Diboll will be a tough first opponent when they roll in here to start the season and they were a district champion. Coach (Greg) Neece will have Anahuac buzzing. A schedule like that can only make you mentally tougher and stronger and if we can stay healthy it will help us in the long run for district.”

The Cardinals will look to battle for a 11-4A title with all six teams capable of making a playoff push.

Splendora surprised many by winning the 11-4A title. This year, the Cardinals would love to be that surprise team.

“Our district, we feel, is wide open and should be competitive,” said DeShazo. “Splendora was a nice surprise last year and will be strong again. Coach (Randy) Crouch will have LC-M amped up and ready to go. Lumberton has a lot of key players back. Huffman is always a factor, especially with some of their great skill people back and Livingston should be much better. There really is not a sure-shot favorite, everyone is going to have to bring their ‘A game’ each and every week and if the Cardinals can do that, I really like our chances.”

VOLLEY ROUNDUP: BC, OF, WO-S all net big wins