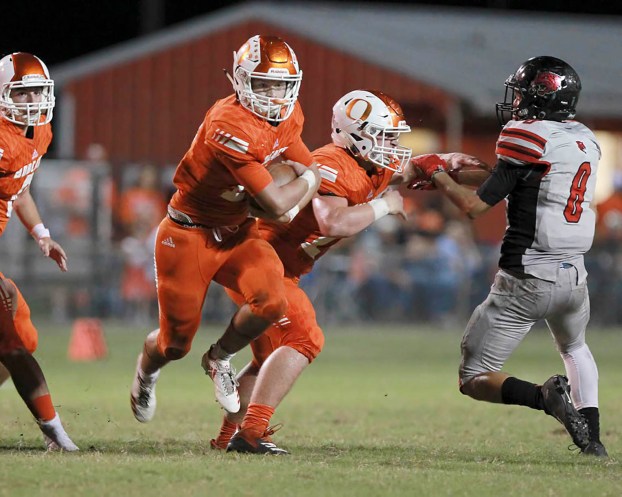 Bobcats ready to bounce back in 12-3A play

ORANGEFIELD – There is no question that the Orangefield Bobcats are just chomping at the bit to get their 2019 football campaign rolling.

Last year, the Bobcats (5-5) dropped down to Class 3A Division I as their aspirations ran high. They rolled out to a 4-1 start but struggled down the stretch as they finished 2-5 in District 12-3A Division I and missed the playoffs after making it the five previous years in Class 4A Division II.

“Last year was so frustrating because we got off to a good start and simply struggled the second half of the season,” said Bobcat Coach Josh Smalley. “It did leave a bad taste in the kids’ mouths and they don’t want to repeat what happened. They have answered the bell ever since the offseason started and are focused in on what they want to accomplish. We have a pretty strong senior group, several who have started since sophomores so we’re excited about what the season holds.”

With 16 starters back, eight on each side of the ball, and a very experienced senior class, the Bobcats definitely know the schemes and what the coaches have installed.

The Bobcat coaching staff visited Liberty Hill, last year’s Class 4A Division I state runnerup, to pick up more information on the vaunted Slot-T offense and how they operated their offseason.

“We, as a staff, picked up a lot of good things from our Liberty Hill visit,” said Smalley. “We learned a few more things about the offense but we were also able to strengthen our offseason program by looking at qhat they do. Our kids are coming in here much more stronger and physical this year then in the last couple years.”

Pacing the Bobcat Slot-T offense will be quarterback Gunner Jones, who stepped in nicely last season after the Bobcats lost senior starter Mason Gonzales to a season-ending knee injury.

“We hated dearly to lose Mason last year but Gunner stepped in under fire and got six games under his belt,” said Smalley. “He’s gotten bigger and stronger and is at about 180 pounds now. He knows the offense really well and what we like is that he has emerged as a vocal leader for us.”

Jones will have a plethora of running backs to get the leather to with some experienced guys.

Kadeon Evans and Chase Broussard are swift at the tailback and halfback slots while Hunter Ashworth, Clayson Choate and Kaiden DuBose can provide nice depth and are both solid defensive secondary starters.

“We like the depth we have in the backfield and we need that because they all play defense as well,” said Smalley. “We have guys that are interchangeable. They’re all capable of toting the ball. We really like how much Chase Broussard has made himself a better player in the offseason, he was already a good one. The big thing is, we’ve got to keep all of those guys healthy because they are our skill guys.”

When the Bobcats put the ball in the air they will rely on receivers DuBose, Cade Brown and Logan Gipson.

“We’ve got some kids capable of catching the ball out there,” said Smalley. “Gipson is moving over from the line to play some split end for us. Mason Sampson will play a lot at tight end.”

On defense, the Bobcats will be running a 4-3 scheme.

“We’ve got a lot of kids playing on both sides of the ball and they all pretty much have some defensive experience,” said Smalley. “We’re looking for a few of our younger guys to give us depth on the defensive line. We like what we have coming back at linebacker and in the secondary.”

The defensive line is sparked by All-District performer Colby Gonzales along with Kayson Dubois with Coulter, Sampson and Ashworth playing key roles as well along with Cutler Hubbard.

The linebacking unit is paced by Puckett, who was First Team All-District, along with Kent Michael and Evans.

The Bobcats have a solid, veteran secondary led by All-District pick Cade Brown along with Broussard, DuBose and Choate.

The Bobcats are blessed with a nice schedule this year as they will play seven of their battles in the friendly confines at home.

Jones will likely handle all of the kicking duties, from kickoffs to extra-points and punting as well.

They will play their first four games at home, including their District 12-3A opener against long-time rival Buna on Sept. 27.

Orangefield will host KIPP Generations in their opener Aug. 30 and will also host Livingston and Shepherd in non-district.

“I think we can really benefit from our schedule if we go out there with confidence each and every game,” said Smalley. “Last year we had four games at home and this year we have seven. Everyone wants to start the season strong but it’s how you finish at the end that counts. We started strong last year too but our goal as a staff and as a team this year is to keep improving each and every game. We didn’t do that last year and we want to stress that hard this year.”

Last year, it was the Woodville Eagles and East Chambers Buccaneers that dominated the 12-3A landscape and it should be a much tighter race this time around.

“East Chambers is loaded again from a team that went to the regional finals,” said Smalley. “They have unbelievable skill people that can flat-out go for Coach (Russ) Sutherland. Woodville, who were the district champs, always has tremendous athletes. So I would say those two teams are the frontrunners again to someone else knocks them off.”

Orangefield will host both Woodville and East Chambers this year.

The rest of the district plans on being in the fight as well.

“Looking at it across the board, I think our district as a whole is much better 1 through 8 compared to last year and it’s going to be a battle every week,” said Smalley. “Buna will have a few key kids back and Coach (Bradley) Morgan always has those guys lining up and playing hard. Watch out for Anahuac to get even better after that got Coach (Greg) Neece in there now, who has been a proven winner wherever he has been. Hardin is always strong with their wide-open offense. Kirbyville, you know, always has some athletes and Warren has a lot of kids back. It’s going to be interesting to see how it will all wind up in November.”

The Bobcats are just ready to get after it and prove a point when the 2019 campaign kicks off.

“We’ve got plenty of things to work on but we really like where we are at right now,” said Smalley. “If we continue to work like we have, there will be some exciting Friday nights ahead for us, we just have to believe.”