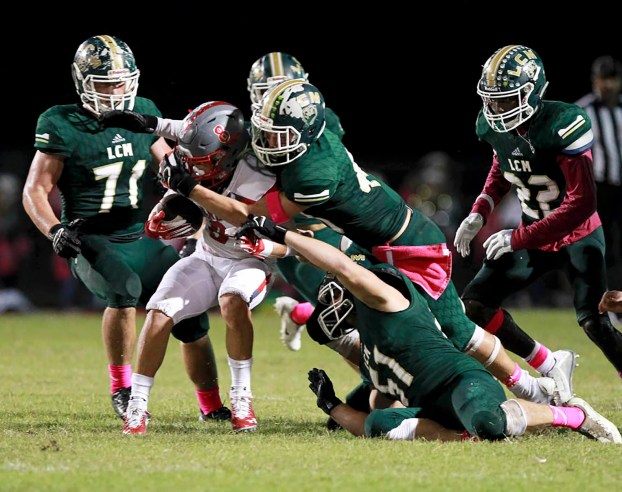 Mark Pachuca/Orange Leader The LC-M defense puts the heat on a Huffman running back during district action last season.

LITTLE CYPRESS — The Little Cypress-Mauriceville Battlin’ Bears have pushed hard to make the playoffs an annual thing of late as they have made the postseason five out of the last six years.

However, this year they are in the hunt for trying to do something they have not accomplished since 1997, that’s to win a postseason game.

The Bears (4-7 last season), fought hard down the stretch and pushed hard for the District 11-4A Division I title and wound up 3-2 in district play to finish third as they bowed out to Navasota in the bidistrict round.

Coach Randy Crouch is excited about what the Bears can do this season.

“The kids had a tremendous summer and we had excellent attendance as they kept themselves in pretty good shape,” said Crouch. “With the new UIL rules that were installed this year for some summer workouts, it helped us get ahead of the game. I’m sure coaches from all over the stayed enjoyed that. The kids know a little more of what we want from them and knowledge about the schemes we want to run, which has not changed much.”

Crouch will be entering his 11th season as head coach in Bear Country as LC-M will bring back a slew of experience from last year’s squad as seven starters return on each side of the ball.

Senior quarterback Ethan McCollum returns to power the Bear attack. Injuries slowed down McCollum his junior season after he was The Orange Leader’s Newcomer of the Year as a sophomore, when he proved his might with both his legs and arm.

“It’s great to have Ethan back strong and healthy,” said Crouch. “He had such a tremendous sophomore year where he showed so much promise until the injuries got him last year. We were proud of what (Adam) Pope did for us last year by stepping in there and playing well. It’s good to have Ethan back in the saddle though, because he knows our offense well.”

Austin Landry will be the backup going in and will see some time.

McCollum will see some nice experience coming back to get the ball too.

At receiver, Brandon Pollock is back after a solid campaign in which he was named Offensive Newcomer of the Year on the All-District Team. The Bears also have All-District receiver James Williams and fellow receiver Darian Williams, who is a dangerous return man, back. Also, Seth Carpenter, Tyler Rhodes and Max Greer are expected to get their fair share of touches.

“That’s a lot of experience coming back for us at receiver,” said Crouch. “They all have nice hands and can turn up the speed when they get it. They are so big in our return game too. What’s really been impressive is that group, with the quarterbacks, were up here all summer long, working out a whole lot and tossing the ball around.”

Senior running back Landon Bearden returns to spark the backfield mix. Oliver Garcia, Carson Peet and Anthony Bandiero will heavily figure into the backfield as well.”

Carter Cates will step in at tight end along with Matthew Lopez and Brandon LeBouef.

“We’re looking for some players to step in and fill some big roles on both the offensive and defensive lines,” said Crouch. “We’ll be looking at several young guys and also playing close attention to some of our JV guys, who could possibly move up when district comes around.”

The coaching staff is looking for some nice depth as well on the defensive line.

Bahl, Brown, Oliver Garcia, Eric Garcia and Diamonte Kiel will each see plenty of time in the defensive trenches.

The Bears do have plenty of depth at the linebacker spots including Lopez, Cates, Bandiero, LeBouef, Max Greer and Jomari Davis.

“It’s great to have Ken’Teon back there again,” said Crouch. “We threw him into the fire last year and he responded big time and got better each week and he’s been working so hard to prepare for another nice season.”

Experience should provide confidence for a Battlin’ Bear squad that will look to navigate through a formidable non-district schedule.

The Bears power up their season at home Aug. 30 against defending District 12-3A Division I champion Woodville, followed by 4A Division II powers West Orange-Stark and Jasper, then they will face Vidor and Hardin-Jefferson before opening up 11-4A action Oct. 11 against Orange County rival Bridge City.’

“We have another tough non-district schedule in front of us,” said Crouch. “Our first three opponents won district titles and WO-S and Jasper are both ranked in the top five in the state going into the season. Vidor is always a tough place to play and Coach (Jeff) Mathews always has the Pirates ready to play and Hardin-Jefferson is going to be better.”

Last year, District 11-4A Division I, which Splendora won, was highly competitive and Crouch feels it could be even tougher going into 2019.

“Splendora is going to be tough again and they have 5A numbers again and will likely go back up again next year,” said Crouch. “Huffman is always in the fight and has the district’s leading rusher (AJ San Miguel) and leading passer (Justin Shively) back. Lumberton has a lot of their skill folks back and will be strong again. Bridge City was so young last year and Coach (Allen) DeShazo and the Cardinals are going to be tougher and a lot more experienced. Don’t count out Livingston either, they lined up a bunch of sophomores last year and could be dangerous.”

Crouch feels the key for the Bears is staying healthy and going out and executing the gameplan.

“Our district is very competitive and the difference between first and sixth could be minute,” said Crouch. “I bet there will be several games that go down to the last possession and limiting turnovers will be vital.”

By Caleb Adams The Orange Leader   BRIDGE CITY — Year one was tough for the Bridge City Cardinals and... read more