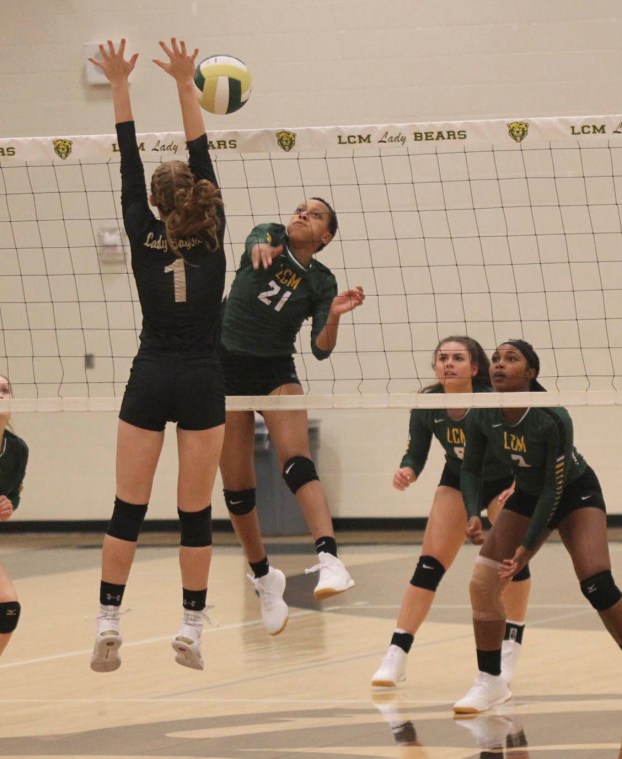 Lady Bears fly around to edge Woodville in 5

LITTLE CYPRESS – In a battle of two tough volleyball squads at The Bear Cave Tuesday night, the Little Cypress-Mauriceville Lady Bears had the final answer as they were finally able to put away the pesky Woodville Lady Eagles behind a powerful hitting performance of Chelsea Perry, the “flying around defense” of Trinity Williams and some clutch serving down the stretch to capture a 25-19, 13-25, 30-28, 17-25, 15-8 victory.

The win was nice for the Lady Bears, who had fallen to the Lady Eagles in the semifinals of the Woodville Tournament earlier in the season.

Perry powered her way to 21 kills for the Lady Bears but had 11 of them in the final two games, including six in the decisive Game 5.

The Lady Bear win offset a brilliant performance from Woodville hitter Emily Mixon. Mixon torched the Lady Bears for a whopping 39 kills on the night but was stuck on the back row for most of Game 5.

With Game 5 tied at 8-8, LC-M’s Brielle Butler served up the match’s final seven points as Perry had three kills in the run and Williams was making diving saves left and right.

The Lady Bears were cruising in Game 1 as they snared a 15-6 cushion. The Lady Eagles rallied back to get as close as 21-19 until LC-M ripped off the last four points.

The Lady Eagles meant business in Game Two, jumping out to a 7-2 lead and then closed it out by scoring 11 of the final 15 points.

Game 3 had a slew of ebbs and flows as both teams had their chances.

Woodville had a chance to win it but a Williams kill tied it up again at 26-26.

The Lady Bears were able to finish it with a Perry kill and a bad hit by the Lady Eagles.

Kayla Merchant posted 11 kills and 10 points for the Lady Eagles.

The Lady Bears will look to continue their winning ways for first-year head coach Rhonda Williams when they visit Vidor Friday as they continue to prepare for district play, which will crank up Sept. 10 at home against Hardin-Jefferson.

BRIDGE CITY – It was quite a celebration at Bridge City High School’s Larry Ward Stadium Monday on Meet the... read more