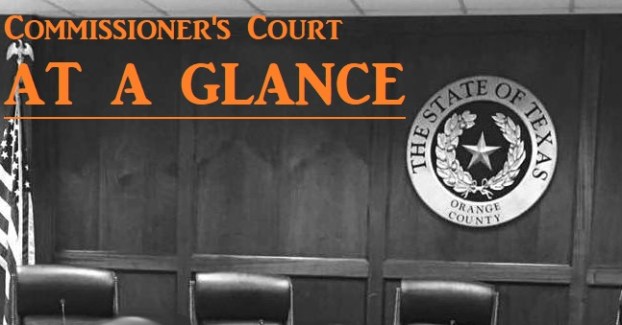 Commissioners discussed everything from position reclassifications to recycling and pay schedules for county elected officials on Tuesday.

To avoid the confusion of elected officials pay increases from a couple of years ago, Orange County Judge John Gothia suggested an across the board raise of 2-percent for the fiscal year starting October 1, 2019.

The new pay scale is available on the county website. The pay increase is approved; however, it is pending waiting on the adoption of the new budget in September.

Commissioner Pct. 1 Johnny Trahan brought up a recycling program brought to him by Keep Orange County Beautiful. The program needs 200 people to sign up for the program for it to start.

“It is a Utah based company that if we get enough people, 200 people, they will come in,” Commissioner Precinct 1 Johnny Trahan said. “If it works it will save the county money at the landfill.”

The program would cost $10 per person per month. The court approved spending up to $1,000 on exploring it.

A resident questioned how it could be a volunteer program if it costs $10 a month.

Jennifer Hill of the Orange County EDC talked about the creation of a Chevron Phillips Reinvestment Zone.

The Reinvestment Zone will create a zone for tax abatements and investment for Chevron Phillips. Under state law to offer abatements or other incentives for economic growth, they need to create a reinvestment zone.

Gothia added, “This is a big thing for Orange County. We definitely want to thank Chevron Phillips for their consideration of Orange County.”

Election Judges will be paid $12 an hour instead of $10 for future elections. The court unanimously approved the raise.

“Anyone that has gone down and seen what an Election Judge does, knows it’s a hard job,” Gothia remarked.

Since these buses will not require CDLs to operate, anyone can apply for the positions.

The buses, priced at over a million dollars, are free to the county through South East Regional Transit. The county, however, is responsible for paying the drivers.

To lower health insurance costs for the county, a Wellness Incentive Program has been continued. The plan involves an extra day off for every County Employee who completed an annual physical and biometric screening.

Viator said, “The goal of the incentive program is to get as many people getting the screening as possible.”

The court held three closed session meetings, and with no action taken on any.

You can watch the session on our Facebook page HERE

County transporting prisoners from out of state to stand trial