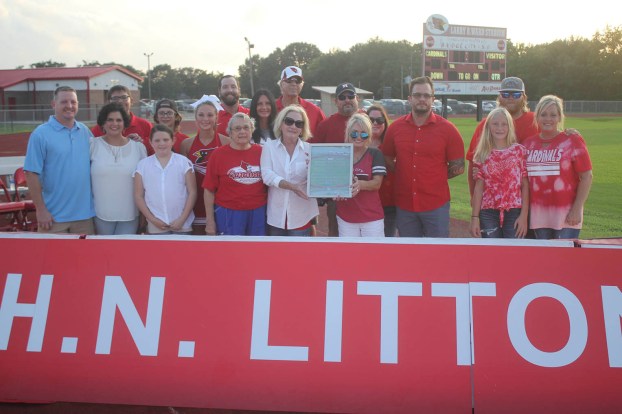 BRIDGE CITY – It was quite a celebration at Bridge City High School’s Larry Ward Stadium Monday on Meet the Cardinals Night as the field was officially named H.N. Litton Field after the late legendary Bridge City trainer.

The Bridge City Independent School District Board of Trustees proclaimed it in May and he became official with a sign that will go on the scoreboard when the Cardinals open the season Friday at home against Diboll.

Litton’s family was on hand for the celebration.

Litton had 23 years of service for Bridge City (1965-1988), beginning his career as the athletic trainer.

Litton was inducted into the Southeast Texas Coaches Hall of Fame in 1999 and honored as a Distinguished Alumni for Stephen F. Austin University in 2012.

Litton was highly regarded by all who came in contact with during his career at Bridge City ISD, which was testified by the large response from his former pupils, parents and friends who supported the resolution to rename the football field after him.