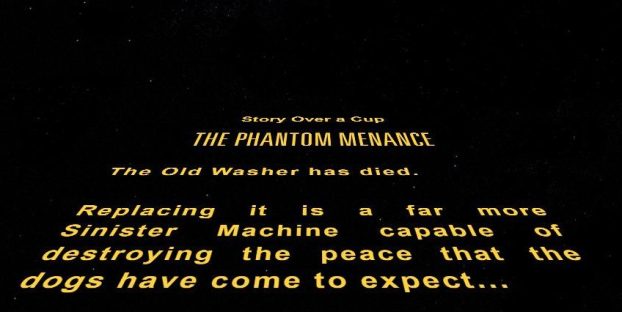 Story Over a Cup Episode 1: The Phantom Menace

It was to be expected, we were having problems with it. The washer would act as the lid was up and not start. I ordered a new part, only to find out that the control board was out.

I am not buying a piece of a washer that costs almost as much as a new washer, so we bought a new one.

But we decided to make a few changes. The house we own has the washer and dryer outside.

So you melt in the summer and freeze in the winter doing laundry. We decided to install the connections in the kitchen and move them inside.

You would think that it was a star destroyer from another planet.

It was as always, oddly entertaining.

It started with the arrival of the delivery truck.

To me, it was about time, I had been ready all morning. I do not know about you, but giving me an eight-hour time window of when you will be there is not fun.

Especially if you have dogs.

So, they arrived and I immediately start splitting up the dogs into manageable groups to let the delivery guys get the washer in.

They get it in, over the screaming yelps of four dogs convinced giant aliens are landing, and they are gone.

So, the washer is hooked up in its new home in the kitchen, and my boys are immediately enthralled.

With the first load in, we see that the boys have detected a disturbance in the force.

Roswell was staring at the base of the washer. And when I say staring, he is on his feet, staring at the corner. He is intent on catching whatever it is.

I had to drag him away during the spin cycle because he was trying to bite the washer.

Picture a 45-pound ball of energy trying to eat a washing machine.

Bernie started to watch the machine from up close until it made its first noise.

After a few barks, he felt that the best place was the living room couch which is on the far wall from the kitchen.

Bernie looks like a Lab-Pit. But do not let that brave exterior fool you. He is afraid of plastic bags and anything that does not fit into his idea of normal.

Then there was Bill.

He was sitting in his curious dog pose, cocking his head, staring at the device which has invaded his home.

I am not sure, but I think he was trying to get it to move or shut off by using the force. He does the same stare at me when I am eating something he wants.

“That is not the food you wanted. Give it to me.”

Next week the saga continues.

Healthy childhoods one of many ways to prevent violence