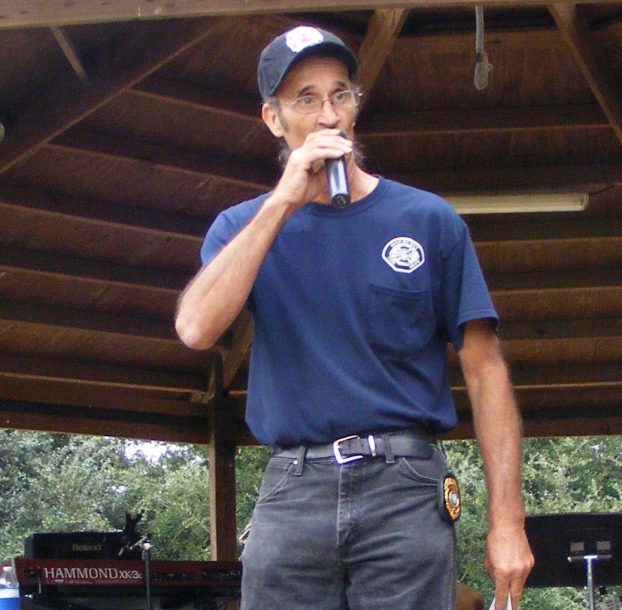 Leader file photo Pinehurst Fire Chief Shon Branham sings to the crowds during an event in West Orange. He and his Singing Firemen will perform during the Pinehurst Labor Day Senior Citizen’s Picnic

PINEHURST — An annual tradition enters its 20th year as plans for the Pinehurst Labor Day Senior Citizen’s Picnic are underway.

Shaun Branham and his Singing Firemen will provide the music for the much-anticipated event. As an added treat, Branham’s niece Crystal, also a firefighter with Pinehurst, is expected to sing as well.

The event is not limited to residency in Pinehurst and is open to all area senior citizens and free of charge.

Parking is available at the church facility, but space is limited. Shuttle service will be available to and from additional parking site located at Sabine Federal Credit Union on Strickland Drive beginning at 9 a.m.

The annual event began in 2000 and has been held every year expect twice due to a hurricane.

Robert’s Meat Market and Restaurant will cater the event as it has each year. The meal is traditionally served at approximately 11:15 a.m., by the Little Cypress Lions Club.

First Financial Bank provided a big-screen television as the grand prize this year.

Two rocking chairs will also be given away as well as several door prizes.

The annual picnic originated when Mayor Pete Runnels wanted to do something for the seniors in Pinehurst. The Picnic is funded completely by donations of local businesses, banks, companies, and individuals from throughout the Pinehurst and Orange area.

“This is all by donations, no city money is used for this event,” Vine added.

It has grown to provide a picnic for over 700 residents each year.

City officials felt they needed to have something for the senior citizens of Pinehurst, and this was a great way to do it, according to previously published Orange Leader articles.

Coffee with the Congressman