Langston Hughes not only visited Orange, Texas but also left his mark with his autograph.

James Mercer Langston Hughes was born February 1, 1902, in Joplin, Missouri. His parents divorced when he was a young child, and his father moved to Mexico. He was raised by his grandmother until he was thirteen, when he moved to Lincoln, Illinois, to live with his mother and her husband, before the family eventually settled in Cleveland, Ohio. It was in Lincoln that Hughes began writing poetry. After graduating from high school, he spent a year in Mexico followed by a year at Columbia University in New York City. During this time, he held odd jobs such as assistant cook, launderer, and busboy. He also travelled to Africa and Europe working as a seaman. In November 1924, he moved to Washington, D. C. Hughes’s first book of poetry, The Weary Blues, (Knopf, 1926) was published by Alfred A. Knopf in 1926. He finished his college education at Lincoln University in Pennsylvania three years later. In 1930 his first novel, Not Without Laughter, (Knopf, 1930) won the Harmon gold medal for literature, according to https://poets.org

Hughes was invited to the city to read some of his poetry.

He signed the small booklet, the poem believed to have been read during the historic moment. 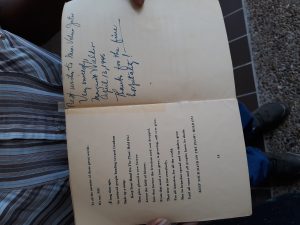 With sincere regards from ~

Margaret Walker also autographed the book but in the back. She was also a poet and novelist.

Walker’s first collection of poetry, For My People (1942) won the Yale Series of Younger Poets Award. Walker was the first Black woman to ever receive the prestigious award, according to www.poetryfoundation.org.

Orange African American Museum will include these autographs along with a handwritten poem by Hughes in its collection.

“We are blessed to have these,” Orange African American Museum President Henry Lowe said.

Lowe said the library was gifted some books and the autographs were discovered while he was sorting through the books.