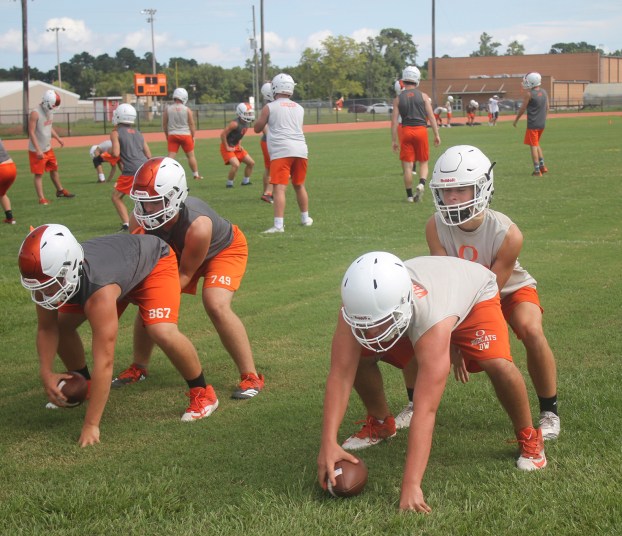 Van Wade/Orange Leader The Orangefield Bobcats have been working hard in practice and they will welcome in the LC-M Bears for their first scrimmage Friday.

Area football teams got to go full contact Saturday and will for most of the week and when Friday rolls around, they will get to line up against someone else in a different uniform instead of battling their own teammates.

The West Orange-Stark Mustangs Mustangs have two scrimmages set with Port Neches-Groves and Vidor. WO-S will host PN-G Friday at 7 p.m. on their new turf and will visit Vidor on Aug. 22 at 7 p.m.

WO-S, which is seeking its 10th straight district crown, will open its 2019 campaign on the road Aug. 30 at Nederland.

The Little Cypress-Mauriceville Battlin’ Bears will scrimmage at Orangefield Friday with the freshmen starting at 4 p.m. followed by the JV (5 p.m.) and the varsity (6 p.m.) and will host defending Class 3A Division II state champion Newton Aug. 22.

The Bears welcome back seven starters on each side of the ball as they will look to better last season’s 4-7 mark and 3-2 district finish in a very balanced District 11-4A Division I field.

LC-M has made the postseason five out of the past six years but are looking for their first playoff win since 1997.

The Bridge City Cardinals will visit Buna Friday in their first scrimmage and will welcome in Hamshire-Fannett Aug. 22 for their second scrimmage.

Bridge City was the youngest team in the district last season as they utilized a slew of young underclassmen. Plus, the Cardinals battled the injury bug at times. They will look to bounce back from a 2-8 campaign and a 1-4 district mark. The season looks bright with the return of 13 starters, eight on defense.

The Orangefield Bobcats, after hosting LC-M in a scrimmage Friday, will visit Lumberton Aug. 22 in their second scrimmage tilt.

The Bobcats were a young team last year as they will welcome back more starters on both sides of the ball than any other team in the district. Orangefield returns eight starters on each side of the ball.

The Vidor Pirates will play host to the Silsbee Tigers in a scrimmage Friday before welcoming in WO-S on Aug. 22. The Pirates will open their season on the road Thursday, Aug. 29 at Montgomery.

The Little Cypress-Mauriceville volleyball team has gotten off to a superb start of the season after they wrapped up the... read more