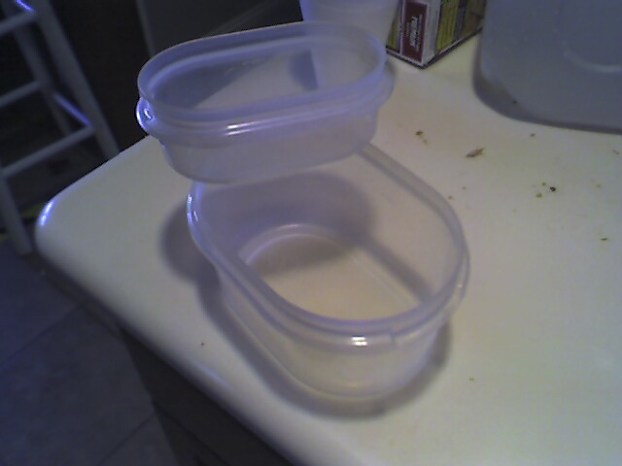 Story Over a Cup: Dead plastic bowls tell no tales

This is the neighborhood. A hundred or so souls who go about their business.

I am a detective.

Well, not really. But the other day I had to step into the role of detective to solve a mystery before my wife came home and committed three counts of dog murder.

See, my wife had just bought a new set of Tupperware. Between natural losses and our dogs’ love affair for eating plastic, we had lost most of them.

But to be fair, it wasn’t all the dogs’ fault.

It was one. Bill.

Since an early age, he has had a fixation with silverware and plastic. For a while, we had no spoons because he would take them out of the dish rack and run off with him.

He also would try digging in the trash for plastic 2-liter bottles and other trinkets.

His addiction only got worse.

Before long the living room started looking like a plastic recycling center.

Bill became my wife’s nemesis. No matter what she tried, he seemed to be able to figure out how to get into cabinets and get the plastic.

He even pulled it out of her lunch bag one evening.

The intervention my wife held was a spanking. Of which, he grinned and soon found another plastic bowl.

So, I realized that if one of the new ones had been eaten, Bill might be a dead dog walking.

Finding it before my wife did was saving a life.

I had him sitting in his chair (he has a chair we put in front of the window so he can watch things outside. It keeps him out of trouble. Mostly).

“Bill, just confess and it will go easier on you.”

He stared at me with his foolish grin.

“I know you ate the new Tupperware, just tell me what you did with it.”

He then jumped off the chair and ran to the kitchen. I was amazed. I didn’t think this would work. Maybe he was taking me to where the plastic was buried.

There on the stovetop was the melted charred remains of the plastic bowl. Apparently, I had forgotten that the stove was still on earlier.

I must have gotten distracted and set it on the stovetop and forgotten.

A bark from Roswell brought me back to the fact that I now had about twenty minutes to scrape off the plastic from the stove. Then hide the evidence so the wife would be none the wiser.

I could bury the bowl. Maybe put it in the bottom of the trash bin.

After all, missing melted plastic bowls tell no tales.

On a side note, if no one hears from me again, you know it didn’t work.

Until next time, keep the cups full and hot!

Overpopulation is the biggest environmental threat

By Glen Colton Americans plant trees and host community events to promote conservation and sustainability. Those activities are important. But... read more