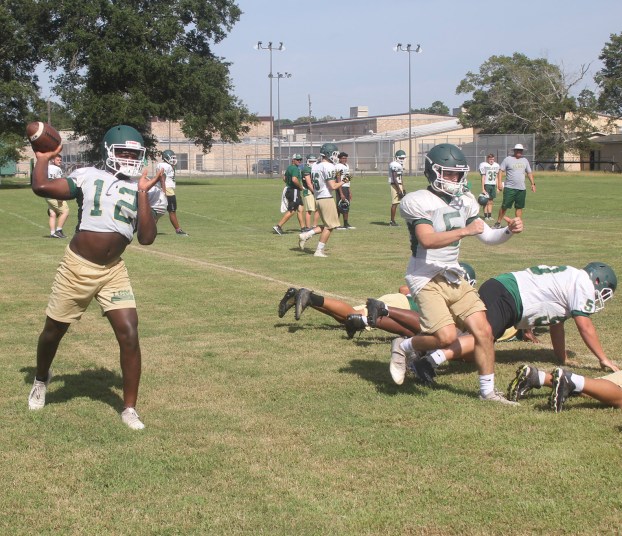 Van Wade/Orange Leader LC-M quarterback Ethan McCollum looks for a receiver as the Bears went through drills at practice.

The Little Cypress-Mauriceville Battlin’ Bears have made the postseason five out of the last six years as the program is on a quest to nab their first playoff victory since 1997 and have been beating the elements with strong practices this week with a strong turnout and nice veteran leadership.

“It’s been hot but it’s just your typical August in Texas,” said Coach Randy Crouch, who is entering his 11th season as the Bear mentor. “The turnout was excellent during the summer and with the new UIL rules on workouts, we were able to work on a few things that we couldn’t in the past and coaches across the state have to really love that. As far as conditioning goes, the kids came back in pretty good shape.”

Coach Crouch welcomes back seven starters on each side of the ball as they will look to better last season’s 4-7 mark and 3-2 district finish in a very balanced District 11-4A Division I field.

The Bears had a super turnout for the first week of practice.

“We had about 130 kids show up this week, which is excellent numbers for us,” said Crouch. “We still have a lot of young kids that need to prove themselves, especially with the upcoming scrimmages and non-district play. We are happy about the depth and we look for some of these young guys to pick up the system and perform well for us down the road.”

The Bears will scrimmage at Orangefield Aug. 16 and will host defending Class 3A Division II state champion Newton Aug. 22.

ORANAGEFIELD — It was a busy first two days for the Orangefield Bobcats as they started practice for what they... read more