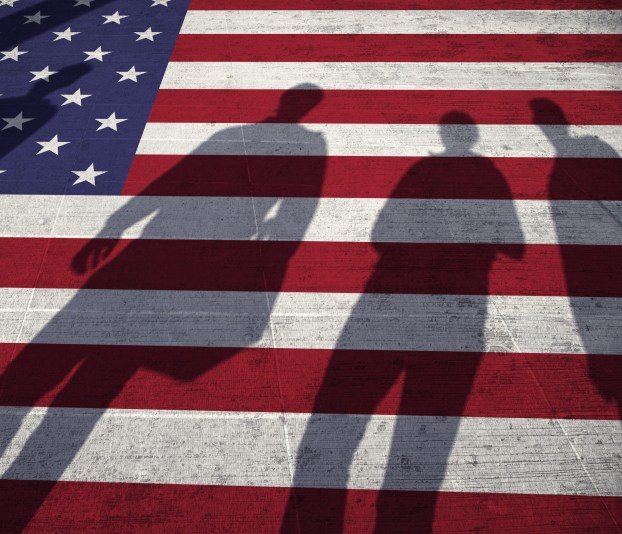 Shadows of group of people walking through the city streets with painted Usa flag on the floor. Concept political relations with neighbors.

Fernando Garcia, executive director of the Border Network For Human Rights, has been close to the issue for 20 years. He said more people have sought asylum in past years, but the difference now is that Trump is intentionally creating a racially charged conflict for political ends.

He said if the administration was really worried about the build-up at the border, the obvious response would be to hire more asylum officers and immigration court judges to speed up deportation or asylum.
“That didn’t happen,” Garcia said. “The administration saw an opportunity to actually create what I believe this administration is good at – to create chaos, to make it appear as a crisis.”

Trump has regularly described migrants as an “invasion” made up of criminals. With the migrants backed up in camps awaiting processing, the pictures reinforce that notion.

But that view of America under siege also showed up in writings of the suspect in this weekend’s El Paso shooting. Federal immigration agencies had not responded to emailed questions by time of publication.

In the past, the Department of Homeland Security has blamed a lack of funding for the desperate and overcrowded conditions of migrants in detention. But Garcia pointed out the White House has consistently prioritized requesting funds for a border wall.

“He got billions of dollars for infrastructure, so there is no way that they didn’t have money to feed children or to have more asylum officers,” Garcia said.

Studies have shown immigrants in fact create more jobs in communities where they settle, and other studies have argued migrants could help save the Social Security and Medicare systems by paying in more than they take out.

Garcia said the emotional battle over migration could help determine the nation’s future for decades – much as migrants did at the beginning of the 20th century.

“Ellis Island defined the character of the nation,” Garcia said. “But this is the question of what kind of nation we’re going to have: The acceptance that America is not that white any longer, or we’re going to have a border that incarcerates children, putting immigrant families in concentration camps.”

To The Leader   West Orange – Cove CISD is currently conducting on-line registration for all current students. The primary... read more