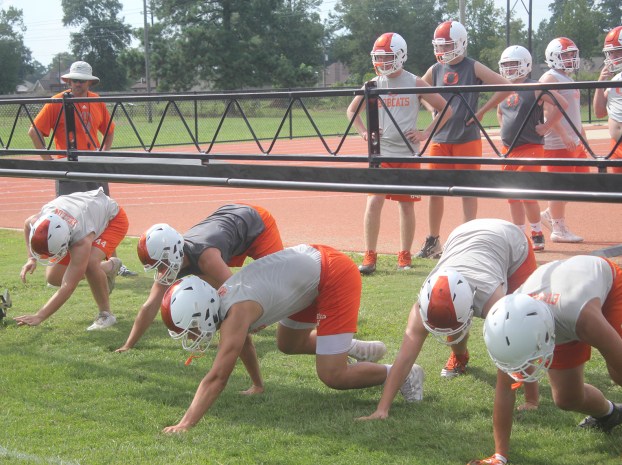 ORANAGEFIELD — It was a busy first two days for the Orangefield Bobcats as they started practice for what they hope is a very promising season.

“The kids came in here in pretty good shape,” said head coach Josh Smalley. “They really had a good summer working out and they were ready to go.”

“What has really motivated the kids is that last year left a bad taste in their mouths and they want to be part of something special to turn this year around,” said Smalley. “We have a strong senior group, with a lot of them contributing when they were sophomores, that really want to win. Early on, we see some strong leadership out of that group and that feeds down to the younger kids and you gotta love that.”

The Bobcats were a young team last year as Coach Smalley will welcome back more starters on both sides of the ball than any other team in the district. Orangefield returns eight starters on each side of the ball.

The numbers remain good for the program.

“We’ve got anywhere from 75 to 80 kids right now,” said Smalley. “Not quite as much as last year but pretty close.”

The Bobcats will have their media day for mugshots and pictures for their program Saturday, Aug. 10 at 8 a.m.

The Bobcats will host LC-M in their first scrimmage Aug. 16 and will then visit Lumberton Aug. 22 in their second one.

The Bobcats are also fortunate with their schedule this year as they will have seven home games.