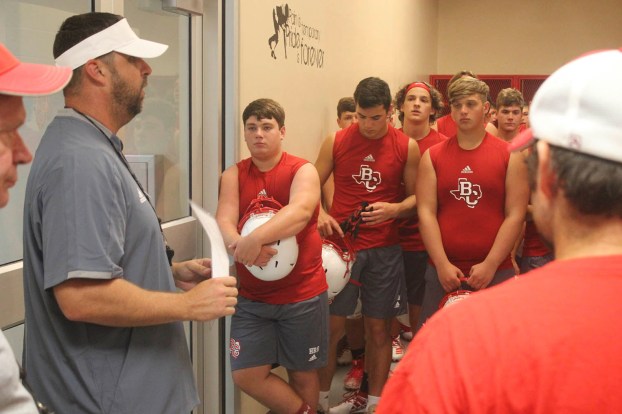 The Bridge City Cardinals will look to rise up again to compete for the 11-4A Division I title after first-year head coach Allen DeShazo led a young Cardinal team last season in his first year at the helm.

Bridge City was the youngest team in the district last season as DeShazo and staff played a slew of young underclassmen. Plus, the Cardinals battled the injury bug at times. They will look to bounce back from a 2-8 campaign and a 1-4 district mark. The season looks bright with the return of 13 starters, eight on defense.

“The kids had a super summer, they were up here all of the time, getting stronger,” said DeShazo. “I think 99 percent of the varsity was here, working out every day. They have really set a good example for our younger kids. It was a much better turnout then we had last summer, which was great. I think they really want to do some good things this year.”

The Cardinals reported to practice Monday at 3 p.m. and hit the practice field at 4 p.m. on a warm afternoon.

“It is definitely hot and we’ve been accustomed to having our first few days working out in the mornings but they adjusted pretty well,” said DeShazo. “We’re really excited about our numbers compared to last year. We have anywhere from 115 to 120 kids out. We have a really big freshman group. We’re just excited to kick this thing off and excited about what the season could hold. The kids are ready to go and the coaches are excited about it.”

The Cardinals will have their media day for their football program and mugshots at 8 a.m. Saturday, Aug. 10.

The Cardinals will visit Buna Aug. 16 in their first scrimmage and will welcome in Hamshire-Fannett Aug. 22 for their second scrimmage.