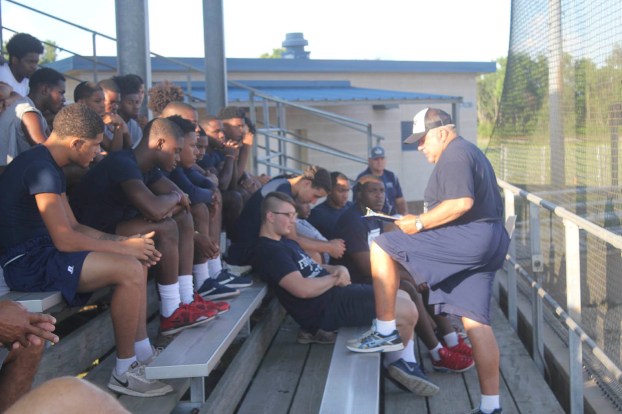 Van Wade/Orange Leader WO-S head coach Cornel Thompson briefs the Mustangs in the baseball stands about expectations for the season before the Mustangs first workout of the season Monday morning.

Over at West Orange-Stark, the Mustangs will be on a quest for their 10th straight district title as they will look to carry on a great tradition.

“We had a tremendous turnout this summer and for the most part, the guys have come in here in pretty good shape,” said Thompson, who is entering his 49th year of coaching. “It’s mostly about conditioning this first week. As far as conditioning goes, we’re looking good except for a lineman here and there.”

The Mustangs met in the baseball stands for Coach Thompson’s traditional annual pep talk and rules talk and then they hit the weight room. Then they went out and braved the brutal stands of Hooks Stadium before getting a little break and hitting the field.

Coach Thompson, who sports an amazing 100-17 record as the head coach, liked the numbers that the Mustangs had on the first day.

“We have about 60 to 65 kids that we consider varsity and junior varsity players,” said Thompson. “We’re happy with the freshman level too. We have about 25 freshman here on the first day, the most we’ve had it awhile. Hopefully we can field a freshman team the entire season and get those youngsters some experience.”

The Mustangs will have their media day for their football program and mugshots on Saturday, Aug. 10 at 9 a.m.

The Mustangs have two scrimmages set with Port Neches-Groves and Vidor. WO-S will host PN-G Aug. 16 at 7 p.m. on their new turf and will visit Vidor on Aug. 22 at 7 p.m.

By Dawn Burleigh The Orange Leader   Five young men will forever be known as the first anglers of the... read more