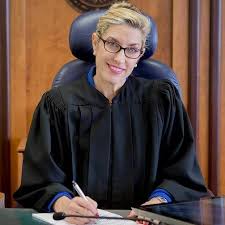 AUSTIN, Texas – Justice Gisela Triana, who currently serves on the Third Court of Appeals, today announced she is running for the Texas Supreme Court. Triana, a Democrat, is running for Place 8, the seat currently held by Republican J. Brett Busby, an appointee of Governor Greg Abbott.

“It’s time for a change,” Justice Triana said. “Simply put, we need more balance on the Texas Supreme Court, a balance that is unfortunately lacking today. Access to justice is more than opening the courthouse doors to people. It means giving them justice once they are there.”

“My long experience as a judge at every level of Texas courts has taught me that we need a judiciary that guarantees a level playing field – a judiciary that does not put special interests ahead of everyday Texans in crucial issues like health care, a clean environment, social justice and the need for honest economic dealing.”

“For too long our Supreme Court has been dominated by political appointees from one party who served one interest,” Justice Triana said.  “We need judges who serve the whole community and make independent decisions based on the rule of law, not political appointees close to the governor or his benefactors.”

Most Texans don’t realize that not only are all current members of the Texas Supreme Court Republicans, seven of the nine Justices were initially appointed to their current positions by Republican governors.

“Texas has a political Supreme Court beholden to elitist power and corporate interests,” Triana said. “We need a Court with diversity of thought and the common sense that comes from fairly considering different points of view.”

Justice Triana is a former prosecutor who has 24 years of experience as a Judge. If elected, she would be the only member of the Texas Supreme Court who has served at every level of the Texas judiciary, from Municipal Court and J.P. Court to County Court at Law, District Judge and Texas Court of Appeals.

“I’ve seen how the system works and how it can be improved at every level,” Triana said. “I’ve devoted my legal career to trying to help ordinary Texans.  The citizens of Texas have elected me to the courts I’ve served on. That’s a different path than working at a big law firm or at the Governor’s office and then becoming a political appointee. It affects your perspective.”

“People are entitled to fair and impartial justice that doesn’t favor the powerful or connected but treats everyone equally before the law. That’s the American ideal, and that’s going to be my guiding philosophy on the Texas Supreme Court.”

Before being elected to the Third Court of Appeals, Justice Triana served as Judge of the 200th District Court, where she presided over hundreds of complex civil litigation cases. Justice Triana has earned a reputation for being fair, courteous, extremely knowledgeable of the law, and willing to listen to all sides.

Justice Triana graduated from the University of Texas School of Law and has taught courses in continuing legal education to judges all over Texas on matters such as emergency protective orders, arraignment, magistrate and other legal procedures. She has been a faculty member of the University of Texas International Office’s U.S. Law Program, which instructs foreign judges and lawyers on United States Law.

Justice Triana has an extensive record of community service, having volunteered with Austin Lawyers and Accountants for the Arts, Volunteer Legal Services, Legal Line, the Pro-Bono College, Habitat for Humanity, Special Olympics, the Children’s Justice Act Task Force, the Austin Women’s Political Caucus, Austin Recovery, the Travis County Child Protective Services Board, Middle Earth Youth and Family Services, and the Greater Austin Hispanic Chamber of Commerce’s Hispanic Technology Institute of Austin. She has served as a Eucharistic Minister at the University Catholic Center.

Justice Triana is a soccer mom who devotes her free time and energy to raising and enjoying her five children.