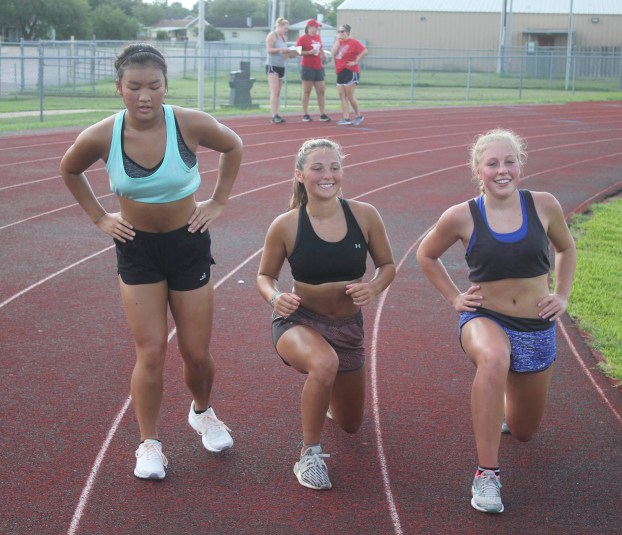 Van Wade/Orange Leader The Bridge City volleyball team was busy out on the track and bleachers Thursday morning to start the first day of volleyball conditioning and practice.

Volleyball starts off season with conditioning

It was time for conditioning and hitting the courts for local high school volleyball teams Thursday as it was the first day to issue equipment and conduct workouts.

The first day that scrimmages are allowed against an opposing team was Saturday. Aug. 3 and the first day of official matches will be Aug. 8 for all of our local teams.

Several teams will be turning towards a youth movement this year as a lot of graduated talent has moved on but there are plenty of players ready to meet the challenge.

The 2018 local volleyball season brought a ton of exciting moments, including a three-round playoff run by the Orangefield Lady Bobcats.

The Lady Bobcats finished the season with a tremendous 31-10 record as the program loved their drop to the Class 3A ranks.

That was followed by two big four-game playoffs wins over Diboll in the bidistrict round and Anderson-Shiro in the area round before the Lady Bobcats fell to a dominant East Bernard squad.

The Little Cypress-Mauriceville Lady Bears punched in yet another playoff ticket.

The Lady Bears (24-16), who had won two straight district titles, started their district season slowly but ran off five victories in their last six matches to earn the third-place playoff berth.

Long-time Bridge City coach Becca Mathews saw her Lady Cardinals go 3-7 in a very competitive District 22-4A race. The Lady Cardinals made excellent strides, especially in the second half of district action, forcing the top seeds into tough five-game matches.

Meanwhile, the West Orange-Stark Lady Mustangs will look to improve with a young team after they went through a 0-12 district campaign.

Three of the teams will kick off their season Aug. 8-10 at the Woodville Tournament, including Bridge City, Orangefield and LC-M.

WO-S will crank up its season Aug. 9 at Port Arthur Memorial.

Cardinal Football campers having fun in the sun

Campers were having a blast at the Bridge City Cardinal Football Camp this week. There was quite a nice turnout.... read more