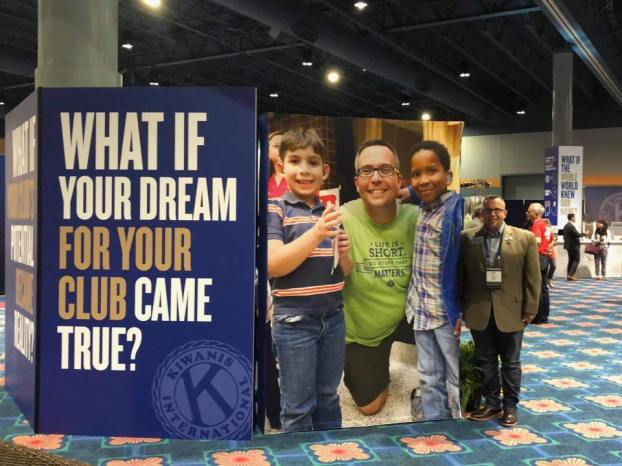 Courtesy photo Pastor Brad McKenzie stands next to his picture at Kiwanis Convention in Orlando.

Kiwanis continue serving the children of the world

Imagine walking into an exhibit hall of an international convention and seeing a giant picture of yourself. That is what happened to Orange First Church of the Nazarene Pastor Brad McKenzie at the Kiwanis Convention in Orlando, Florida last month.

McKenzie is a Region II Trustee with the TX-OK District of Kiwanis. His picture was taken after Hurricane Harvey as he assisted the community of Pasadena, Texas. He was a pastor of a Nazarene church there before relocating to Orange in February.

Kiwanis International was founded in 1915 by a group of businessmen in Detroit, Michigan, United States. The organization was originally called the Supreme Lodge Benevolent Order of Brothers but changed its name to Kiwanis a year later.

The name “Kiwanis” was coined from an American Indian expression, “Nunc Kee-wanis,” which means, “We trade.” In 1920, the motto of Kiwanis became “We Build.” It remained the motto until 2005 when members voted to change it to “Serving the children of the world.” In the early years, members focused on business networking but in 1919, the organization changed its focus to service — specifically service to children, according to its official website.

“We are working on what we call an eliminate project,” McKenzie said. “Maternal Neonatal Tetanus.”

With the support of The Eliminate Project Maternal Neonatal Tetanus, there has been:

Incredible progress has been made since The Eliminate Project started in 2010. Kiwanis International, UNICEF, and its partners have made great strides in eliminating the tragedy of Maternal Neonatal Tetanus.

“There are babies born on dirt floors and suffer horrible deaths,” McKenzie said. “Kids have needs which have to be met so they can grow up and contribute.”

All part of the Kiwanis Vision – “Kiwanis will be a positive influence in communities worldwide — so that one day, all children will wake up in communities that believe in them, nurture them and provide the support they need to thrive.”

McKenzie joined Kiwanis as a way to better understand the ‘going ons’ in a community.

“It felt like a great place,” McKenzie said about his first introduction to the organization. “My service [with Kiwanis] is not tied to my vocation. I love serving and helping people.”

“I want to see children thrive, not limited,” McKenzie added. “I want to be part of the solution.”

Joining Kiwanis opened the door for other areas of growth for McKenzie such as becoming a Police Chaplain and being a part of the Emergency Response after Harvey in Pasadena, Texas.

“Forty thousand people were helped because of the Kiwanis network,” McKenzie said.

He also said he learned valuable leadership skills through the organization.