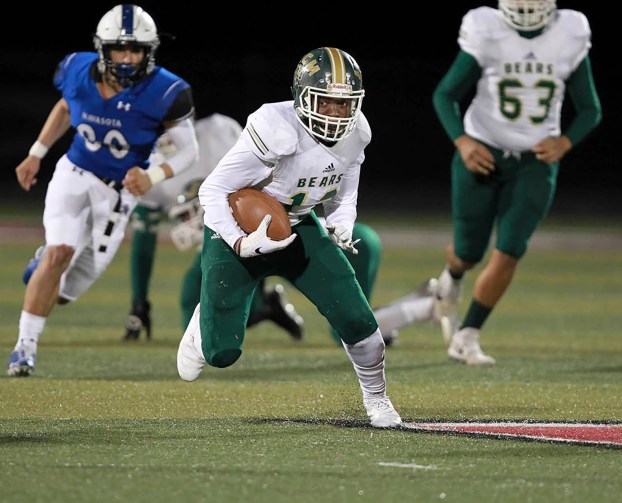 Local high school football teams will look to conquer the heat Monday for the first official day of practice.

Over at West Orange-Stark, the Mustangs will be on a quest for their 10th straight district title as they will look to carry on a great tradition.

The Mustangs will report to practice Monday at 8 a.m. and will meet in the baseball stands for a meeting. They will run the stands and hit the weightroom before hitting the practice field.

The Mustangs will have their media day for their football program and mugshots on Saturday, Aug. 10 at 8 a.m.

The Mustangs have two scrimmages set with Port Neches-Groves and Vidor. WO-S will host PN-G Aug. 16 at 7 p.m. on their new turf and will visit Vidor on Aug. 22 at 7 p.m.

The Little Cypress-Mauriceville Battlin’ Bears have made the postseason five out of the last six years as the program is on a quest to nab their first playoff victory since 1997.

Coach Randy Crouch welcomes back seven starters on each side of the ball as they will look to better last season’s 4-7 mark and 3-2 district finish in a very balanced District 11-4A Division I field.

The varsity Battlin’ Bears will report to the fieldhouse Monday at 6 a.m. and will look to hit the practice field by 7 a.m. The LC-M freshman will report at 9 a.m. The media day and mugshots for the LC-M football program will be Friday, Aug. 9 at 10 a.m.

The Bears will scrimmage at Orangefield Aug. 16 and will host defending Class 3A Division II state champion Newton Aug. 22.

The Bridge City Cardinals will look to rise up again to compete for the 11-4A Division I title after first-year head coach Allen DeShazo led a young Cardinal team last season in his first year at the helm.

Bridge City was the youngest team in the district last season as DeShazo and staff played a slew of young underclassmen. Plus, the Cardinals battled the injury bug at times. They will look to bounce back from a 2-8 campaign and a 1-4 district mark. The season looks bright with the return of 13 starters, eight on defense.

The Cardinals will report to practice Monday at 3 p.m. and will hit the practice field at 4 p.m.

The Cardinals will have their media day for their football program and mugshots at 8 a.m. Saturday, Aug. 10.

The Cardinals will visit Buna Aug. 16 in their first scrimmage and will welcome in Hamshire-Fannett Aug. 22 for their second scrimmage.

The Orangefield Bobcats will look to be in the playoff mix after going 2-5 in District 12-3A Division I last year and 5-5 overall.

The Bobcats were a young team last year as Coach Josh Smalley will welcome back more starters on both sides of the ball than any other team in the district. Orangefield returns eight starters on each side of the ball.

The Bobcats will report at 3 p.m. Monday with the JV and varsity lifting and then the freshman, JV and varsity will hit the practice field at 4:30 p.m.

The Bobcats will have their media day for mugshots and pictures for their program Saturday, Aug. 10 at 8 a.m.

The Bobcats will host LC-M in their first scrimmage Aug. 16 and will then visit Lumberton Aug. 22 in their second one.

The Little Cypress-Mauriceville High School’s cross country coach wants all boys and girls who plan to participate in the 2019... read more