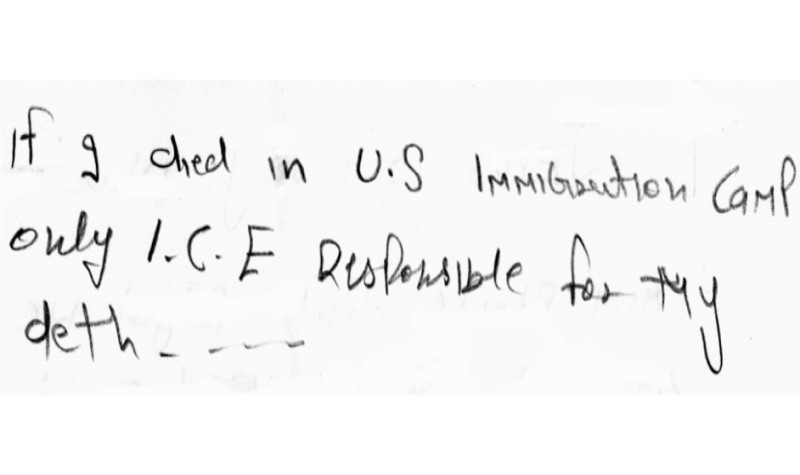 One of the men on hunger strike gave this handwritten note to a visitor. (AVID)

EL PASO, Texas – Some hunger strikers in U.S. Immigration and Customs Enforcement detention around El Paso are now in their third week of refusing food and most water.
ICE is seeking court orders to allow force feeding.
Three men from India are on hunger strike at ICE’s Otero County center in southern New Mexico. Another five Indian men are striking at the El Paso center.
Nathan Craig, a volunteer with Advocate Visitors with Immigrants in Detention, says half of the men are on day 16 and the other half are on day nine.
He says they are all seeking political religious asylum and have been found to have credible cases, but have been stuck in detention for as much as fifteen months.
“These men want to be out of detention,” he stresses. “They want to be free.
“These men are not suicidal. These men want to live, but they want to live under conditions of freedom, and they are willing to risk their lives to pursue that freedom.”
Craig says some have even had their asylum application fully denied, and are due to be deported. But he says they are still stuck in detention, and have been for months.
ICE Public Affairs said it was unable to comment by deadline.
Craig says the men have not violated any law – U.S. code says it is entirely legal to seek political or religious asylum in the country.
He says ICE could release them at will, but instead is keeping them in conditions Craig says federal investigators have found are near to torture.
Margaret Brown Vega, also an AVID volunteer, says the Otero center has seen constant problems with sanitation and medical services. And El Paso is not much better.
“You’re hungry all the time and after a while you just get used to it,” she states. “It’s often cold. You can have the “opportunity” of participating in the voluntary work program, where you would work eight to nine hours a day for one dollar.”
Citing the men’s privacy, the group refuses to disclose the men’s names or details of their cases.
Earlier this year there was a separate group of Sikh Indians on hunger strike in El Paso ICE detention. They had been transferred to Texas from California, where they sought asylum from what they described as religious persecution in India.
Craig refuses to say if the current group includes any men who were in those earlier hunger strikes. But he estimates there have been more than 100 hunger strikes in this region of ICE.