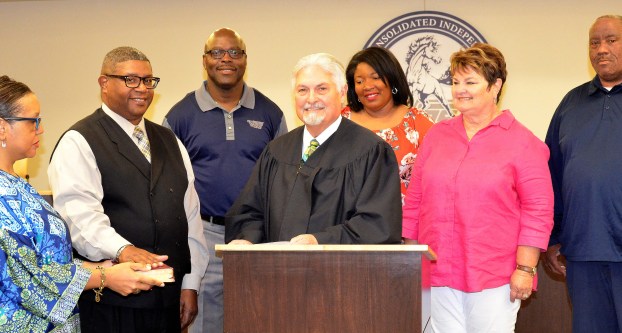 West Orange – Cove CISD is moving forward with the establishment of a school district police department.  Darryl Hunt was announced as Police Chief at last night’s regular meeting of the WOC Board of Trustees. He was sworn in today by Orange County Justice of the Peace Hershel Stagner Jr.

“After a long extensive search for a police chief, we feel that we have found the best candidate in Chief Hunt. He will assist the district in developing a police department in which all WOCCISD stakeholders can be proud. Additionally, we look forward to continuing our wonderful relationships with our local police departments as we serve the students of this great community,” Dr. Rickie Harris, WOCCISD Superintendent, said.

Police Chief Hunt is an experienced law enforcement officer with a 16-year career that has included service within public school and university police department systems. These include the Humble and Beaumont school systems, as well as Prairie View University. He has additionally served as a juvenile probation officer.

He holds numerous law enforcement certifications including Master Peace Officer and a Master’s Certificate in Executive Enforcement Leadership. Police Chief Hunt also holds a Master of Arts in Criminal Justice and has served in the United States Army.

He will officially begin duties July 29.

To The Leader   July in Texas is full of sun, swimming pools and tons of other fun activities for... read more