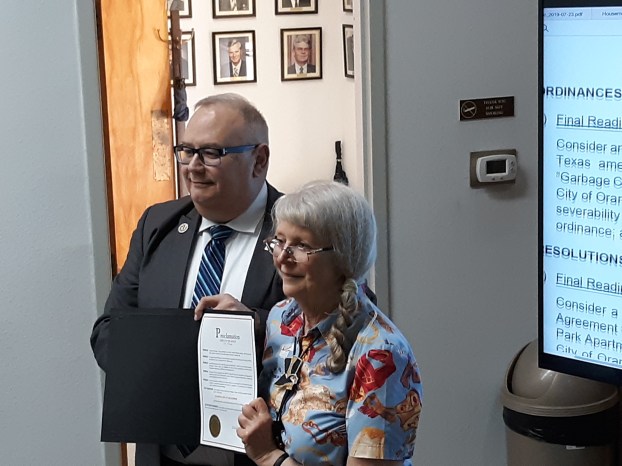 Dawn Burleigh/The Orange Leader Curator of the Stark Museum of Art Sarah E. Boehme, Ph.D. accepts a proclamation proclaiming Saturday, July 23, 2019, as National Day of the Cowboy in the city of Orange during the Tuesday evening City Council meeting.

The City of Orange will join the country to celebrate the cowboy culture on Saturday by observing the National Day of the Cowboy.

One way to honor the day could include visiting the Stark Museum of Art.

Stark Museum of Art, under the auspices of the Nelda C. and H.J. Lutcher Stark Foundation, celebrates cowboy culture and highlights the roles of diverse participants in western history through its collections, exhibitions and programs, according to the proclamation read by Mayor Pro Tem Patrick Pullen.

The fourth Saturday in July of each year is National Day of the Cowboy in recognition of the historic, cultural, and social contributions of the cowboy according to Senate Bill 1522 signed by Governor Greg Abbot. The Bill was passed on May 12, 2015, with 141 for, 3 against and two present not voting.

The National Day of the Cowboy non-profit organization works to contribute to the preservation of America’s cowboy culture and pioneer heritage so that the history and culture which the National Day of the Cowboy bill honors, can be shared and perpetuated for the public good, through education, the arts, literature, celebrations, gatherings, rodeos, and other community activities, according to its official website.

Also during the meeting, Eli Tate, owner of Swamp and River Tours, suggested to the council to consider a project such as the San Antonio Riverwalk for Orange.

“Orginally. the Riverwalk was a sewer,” Tate said. “Now it is the biggest tourist attraction anywhere.”

Tate also asked the council to look into the Mason Project, a predecessor to the City of Orange Boat Ramp.

“The river brought people to Orange,” Tate said. “It could also bring people back for entertainment.”

OASIS set to launch in August