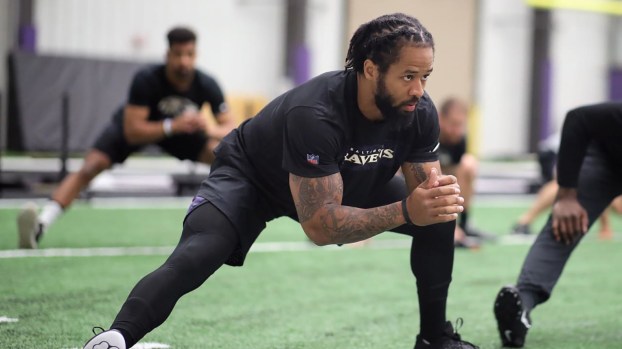 Photo courtesy baltimoreravens.com Earl Thomas gets some stretching in before a workout at the Baltimore Ravens minicamp.

Earl Thomas III spent nine years in Seattle. He helped create the “Legion of Boom” and won a Super Bowl.

Now he’s moved from the West Coast to East Coast. He’s left one defensive legacy for another and is finding his way in a new locker room full of big personalities.

There’s been a lot of change, to say the least. But, somewhat surprisingly, the biggest adjustment for this six-time Pro Bowler has been learning the Ravens’ defense.

“This defense is very complex compared to what we were doing in Seattle,” Thomas said. “We were just playing Cover-3 all the time. Now, we’re making calls on the fly. That’s the biggest adjustment for me.”

So has the 30-year-old Thomas enjoyed the new challenge?

“I haven’t really enjoyed it that much, to be totally honest,” he said, sparking laughter. “But I know it’s going to pay off, because we’re going to make it very hard on quarterbacks.”

The loss of Terrell Suggs, C.J. Mosley and Eric Weddle this offseason stripped the defense of three of its biggest communicators. Defensive Coordinator Wink Martindale said adjusting to that is the biggest transition for his unit.

In their absence, the entire unit has undertaken the mission of “over-communicating,” according to Head Coach John Harbaugh. Listening to the defense during practice is like hearing an orchestra of voices.

That communication is also encouraged in the meeting room, where anybody speaks up at any time with a question. Even a 10-year vet doesn’t feel like he has to know it all, and Thomas said his “brothers” are helping him.

“We definitely talk. Even if you’re wrong, somebody is going to correct you,” Thomas said. “The best teacher to me is just visualization, what you’re doing in practice. When you mess up in practice, it’s easy to see, and Coach gives you a coaching point and you take it, you write it down, and you don’t make that same mistake.”

After breaking his leg (for a second time) in Week 4 last season, Thomas returned to the field during Organized Team Activities and ramped it up during minicamp. He says he feels no ill-effects from the leg injury.

“I have my days,” Thomas said. “But, for the most part, like today, you never want to get off the field when you’re feeling good. Usually, I’ll take three reps a period, four reps, but I didn’t want to come out today. I felt really good.”

Thomas began to flash more in minicamp, starting on the very first play of 11-on-11 when he shot across the field to challenge a pass to tight end Nick Boyle. He was around the ball a lot and celebrated with his teammates Thursday after breaking up a pass in the back of the end zone.

Thomas comes off as very chill, but his on-field intensity flashes.

“He’s a dog, man, everything you want in a safety,” cornerback Brandon Carr said.

“He’s a very passionate, fun-loving guy, loves football, and I can tell that he’s going to bring a lot of energy to our defense this year,” added cornerback Jimmy Smith.

Thomas is also adjusting to a new locker room. His locker is very close to quarterback Lamar Jackson, and Thomas said the two share a lot of laughs.

To the media, Thomas has a serious demeanor, especially compared to the goofiness of fellow starting safety Tony Jefferson and cheeriness of former Ravens safety Eric Weddle.

Jefferson, who became very good friends with Weddle, said it took a little bit of time to see Thomas’ lighter side, and joked that he had to hug him and tell him, “Hey, bro, we love you!”

“He’s Earl. That’s how he is,” Jefferson said. “We’re not here to change anybody. You are who you are, and we’re glad we have him. We love him.”

“I’m not that intense like everybody says,” Thomas said. “But, in the locker room, guys … they’re starting to understand me and vice versa. These are my type of guys. This is the locker room that I want to be a part of. God just worked it out for me.”

At the end of the day, it’s about football, and Thomas has the mentality of a Raven.

“The culture is the dog mentality. Those are my type of players,” said Thomas. “What stood out to me [so far in Baltimore] was just a bunch of young guys that are hungry. It’s good to be around that. I fit right in with the group, especially in the DB room.”

Thomas and Jefferson’s differences will be especially beneficial on the field. Thomas is a true ball-hawking centerfielder while Jefferson likes to attack the line of scrimmage. They complement each other and should be one of the best duos in the league.

“It’s a very natural [fit],” Thomas said. “Tony brings that energy. The first day he came out, he was colliding with people, no shoulder pads. So, that’s my type of guy. We’re going to play really well together. We’re already building that chemistry right now.”

A portrait of the third President of the United States, Thomas Jefferson, is on the $2 bill. Thomas and Jefferson are looking to give the bill an updated look.

“That was cool,” Thomas said. “I posted it on my Instagram.”

Mustangs, Tigers should battle for 10-4A supremacy

For years and years, the West Orange-Stark Mustangs have had a bulls eye on them, whether it has been non-district,... read more