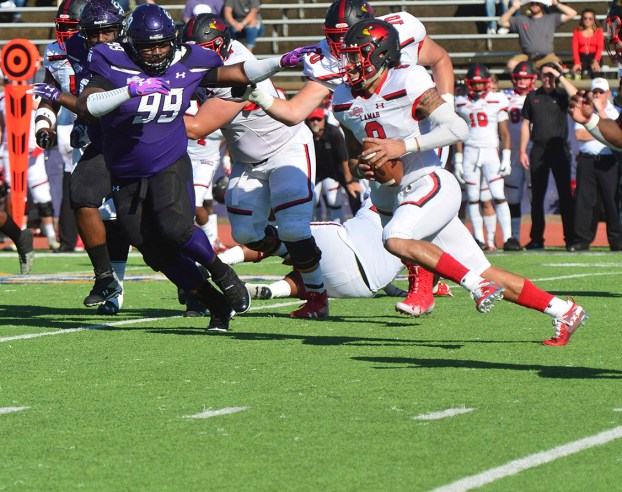 HOUSTON, Texas – Lamar University has been picked fifth in a preseason poll of the Southland Conference’s head coaches and media relations directors announced league officials from the SLC Football Media Day Thursday morning. Nicholls has been picked to repeat as conference champion.

“I’m not sure anyone gets too wrapped up in preseason polls,” said Schultz. “Those are more for the fans and the media. We know coming into this season that we have a lot of hard work to do, and we are taking steps in the right direction. Our guys want to make sure last year was not a one-hit wonder. We want last year to be the benchmark and not the high water mark.”

One of the biggest storylines of the 2018 season, the Cardinals came from nowhere to shock the nation with a late season win streak to earn their way into the NCAA FCS Playoffs. After starting the year 1-4 overall, and 0-3 in Southland competition, the Cardinals rallied by winning their final six games of the regular season to move from last place in the standings into third. Along the way to owning one of the nation’s longest win streaks and best single-season turnarounds, the Cardinals also knocked off three nationally ranked teams. The résumé was good enough to land LU a spot in the NCAA FCS Playoffs for the first time in program history.

The 2019 squad will be led by three preseason All-Southland selections, including first-teamer Daniel Crosley (defensive end). Crosley is joined on the preseason honors squad by second-team selections Myles Wanza (running back) and Elvin Martinez (kicker).

The Cardinals kick off the 2019 season at home Thursday, Aug. 29 against Bethel (TN) University. The game will kick off at 7 p.m. from Provost Umphrey Stadium.

By Bob West Special to the Leader Question No. 1 for me Sunday, after watching Port Neches-Groves exes Andrew Landry... read more