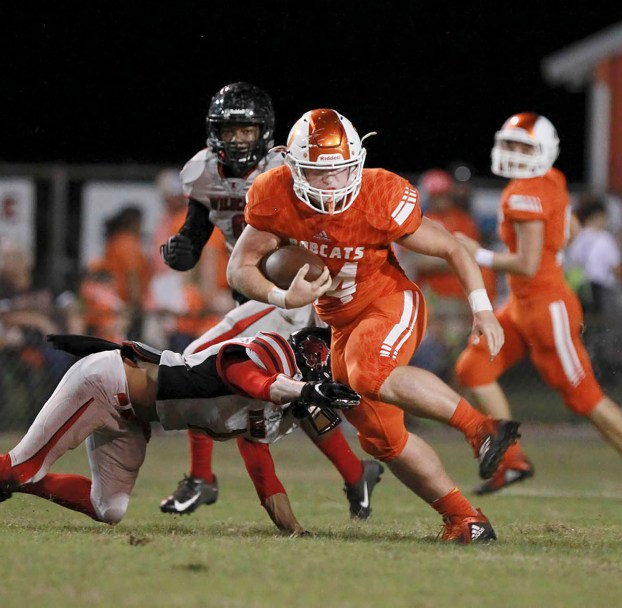 District 12-3A football should be tight; Bobcats should be in hunt

Last season the Woodville Eagles and East Chambers Buccaneers ruled the roost in District 12-3A Division I football action.

Many predictors once again have those two slated to do it once again but the other six teams in the loop will try to prove the naysayers wrong.

Woodville won the district last year with a perfect 7-0 record and finished 11-1 overall. East Chambers, however, rolled in the playoffs. After going 6-1 in 12-3A play, the Buccaneers went on to go 12-2 overall and advanced all the way to the 3A Region III Division I Finals before bowing out to eventual state champion Grandview by one point.

The Orangefield Bobcats will look to be in the playoff mix after going 2-5 in 12-3A last year and 5-5 overall.

The Bobcats were a young team last year as Coach Josh Smalley will welcome back more starters on both sides of the ball than any other team in the district. Orangefield returns eight starters on each side of the ball.

He has plenty of hard-nosed backs to hand the leather too that includes Heston Puckett, Kadeon Evans and Clayson Choate.

The defense should be led by the likes of linebacker Kent Michael and secondary players Kaiden DuBose and Clayson Choate, who is the leading returning tackler.

East Chambers returns just eight starters with six of them on offense. But they return explosiveness in the backfield.

Quarterback Kam Smith returns after passing for 1,521 yards and 20 touchdowns and rushing for 873 yards and 11 TDs.

Two starters on back on defense but they are all-district linebackers Isaiah Hart (137 tackles) and Christian Simien (87 tackles).

Woodville got hit hard offensively due to graduation with just two starters back on offense while five return to the defense.

Keon Chatman will be dangerous in the backfield along with Jaylon Hyder and Jacorey Hyder. All-District defensive back Kaden Young will spark the defense.

Coach Bradley Morgan will see right starters return to the mix in Buna as the Cougars welcome back five on offense and three on defense as they look to make the playoffs for the sixth straight year.

Kameron Richardson and Logan Odell will provide depth in the backfield after combining for nearly 1,000 yards last year while linebacker Blaine Marks defensive end Kristian Johnson are back to lead a young defensive crop.

Hardin, a big surprise in the district last season, returns four starters on each side of the ball.

The Hornets are looking to rebuild their backfield but return two solid pass-catchers in Matthew Tidwell and Trenton Dickey.

Dickey will also spearhead the defensive charges after making 63 tackles along with all-district defensive back Henry Duran (five interceptions).

Anahuac will be looking to make a strong pitch as well behind new coach Greg Neece and five starters returning on each side of the ball.

Kirbyville will look to improve on their 1-9 2018 campaign as eight starters return on each side of the ball.

Quarterback Dilynn Bishop returns after tossing for 1,491 yards and nine TDs and has a pair of nice receivers in Keshaun Keyes and Hunter Wallis to get the ball too.

Coy Fussell returns to the defense after amking almost 100 tackles.

The Warren Warriors will look to get off the snide after going 0-10 as 12 starters return.

Quarterback Michael Mouton looks to be a formidable dual threat and the Warriors will look for backs Daniel Hayes, Luke Whisneant, Kevin Kirk and Wesley Gill to make vital contributions.

It should be a much more competitive district from top to bottom instead of being top-heavy in the forms of East Chambers and Woodville from a year ago. However, those two teams look to be at the top again with some heavier challenges, especially from the likes of Orangefield and Anahuac.

LITTLE CYPRESS — There were plenty of campers having a blast at the Little Cypress-Mauriceville Lady Bear Basketball Camp at... read more