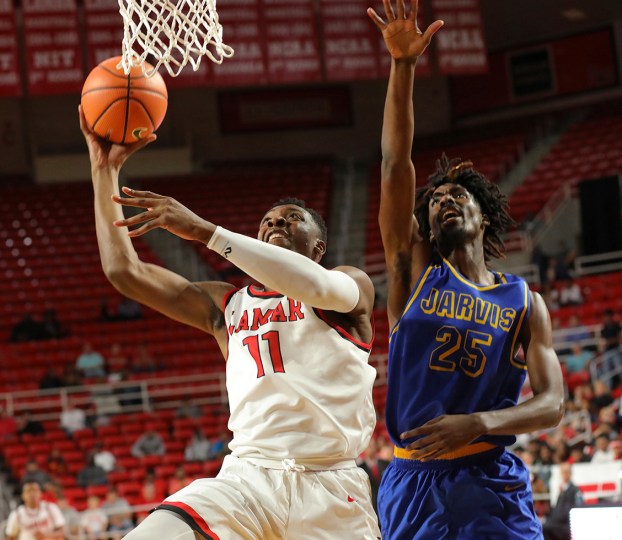 BEAUMONT, Texas – For the second time in as many days, a former member of the Lamar University men’s basketball team has signed a contract to play overseas. Former All-Southland Conference selection Josh Nzeakor will take his talents to Germany to play for PS Karlsruhe.

The PS Karlsruhe Lions are located in Karlsruhe, Germany, and compete in the Pro A league. The Pro A is considered the country’s second division. The franchise was promoted from the third tier Pro B league in 2017. The team is part of the multi-sports club Post Sudstadt.

Nzeakor wrapped up his four-year career in Beaumont as one of the best players to walk to step on the court. He became just the 21st player in program history to score 1,000 points in his career and graduated ninth all-time at LU in terms of rebounds. In a career that consisted of 129 games played Nzeakor recorded 117 starters while averaging 10.5 points and 6.4 rebounds per game. He also shot 56 percent from the field (525-of-937/.560) and recorded 18 double-doubles during his time.

As a senior, Nzeakor played in and started all 32 games averaging 15 points per game while finishing third in the Southland Conference with 7.8 rebounds. He also ended the year ranked among the league leaders with eight double-doubles. Nzeakor saved one of his best games for the end of his collegiate career. The Cardinals opened the conference tournament against Houston Baptist, and Nzeakor put the team on his back by scoring 25 points and pulling down 15 rebounds as Big Red advanced to the second round of the playoffs. In addition to keeping the season alive, Nzeakor’s efforts also secured LU’s 20th win of the season – the program’s first 20-win campaign since 2011-12.

Nzeakor guided the Cardinals to three consecutive seasons of at least 19 wins – the program’s longest run of success since the 1982-83 through 1984-85 seasons. The Cardinals won 69 games during his four seasons on campus and made two trips to the postseason.

BEAUMONT, Texas – Former two-time All-Southland Conference selection, Colton Weisbrod, has signed a professional contract to play basketball for AS Kaysersberg Ammerschwihr BCA. The French-based team competes in the NM1 league in the city of Kaysersberg, France.

The former Cardinal standout is currently listed as a starter on the team’s web site.

A Southeast Texas native, Weisbrod spent two seasons at Lamar University after originally signing with New Orleans out of high school. Weisbrod spent one season at Lamar State College – Port Arthur where he earned NJCAA First-Team All-America honors before inking with the Red and White.

Weisbrod’s impact with the Cardinals was immediate. In just two short seasons with LU he ranked among the Southland Conference leaders in points, rebounds, double-doubles and field goal percentage. For his career, which amounted to 67 games for the Red and White, he averaged 14.8 points and 8.1 rebounds per game, while dishing out 1.4 assists. Despite playing only two seasons with the Cardinals, he just missed making the school’s 1,000-point club (994 points).

In addition to his honors as one of the top players in the Southland Conference, Weisbrod received high praise within the region. The Nederland, Texas native capped his collegiate career by earning back-to-back NABC All-District honors.

In Weisbrod’s first season with the team, the Cardinals made an eight-game improvement in the win column from the previous season and ended the year with 19 victories overall. Weisbrod’s career ended with back-to-back 19-win seasons, consecutive trips to the postseason and also included victories over program’s like Oregon State, Tulsa, Coastal Carolina and UTEP.

BC Cross Country Camp right around the corner