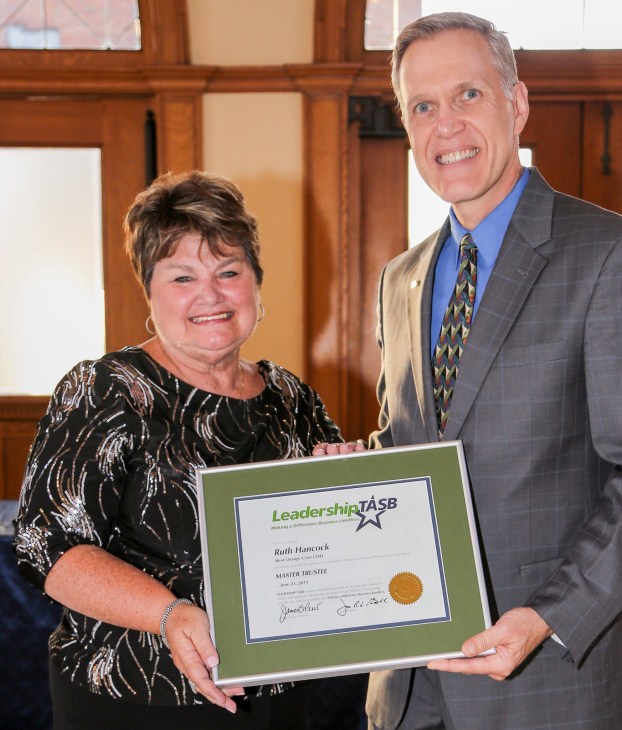 West Orange – Cove CISD President Ruth Hancock has earned the designation of Master Trustee upon completion of Leadership TASB, a program sponsored by the Texas Association of School Boards (TASB).

Hancock was first elected to serve on the board in 2014 after retiring from the district as serving as a teacher for 29 years.

During this fifth and final session, June 20- June 22, school board members in the 2018-2019 Leadership TASB class made presentations of their team’s findings following yearlong research. Class participants researched 23 specific critical issues and their impact on Texas public education.

When Hancock was running for re-election in 2017, she said, “I loved teaching in this district and never had a desire to teach anywhere else. My greatest joy is seeing the success of my former students.”

The Leadership TASB class met in conjunction with the TASB’s Summer Leadership Institute in Fort Worth. More than 1,000 new and veteran school leaders attended the Institute and received extensive training on every facet of effective board governance, heard keynote addresses from renowned education experts, and picked up valuable ideas from district showcases and networking opportunities.

The 2019 Leadership TASB class, composed of 33 school board members, represents Texas school districts of all sizes and property wealth. Participants who completed all required elements of the study program earned Master Trustee status, the highest designation recognized by TASB. Leadership TASB is sponsored in part by H-E-B.