Mary McKenna, who was unable to attend the last council meeting, was sworn in by Judge Jerry Pennington on Tuesday morning. 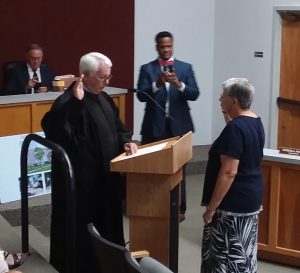 The Mustang Activity bus continues with the Mustang Read and Roll Book Bus stops through the neighborhoods.

The Mustang Activity Bus will distribute books and serve a hot meal to students through a weekly neighborhood schedule.

The program is coordinated through WOCCISD Student Services and WOCCISD Child Nutrition.

Dr. Alicia Sigee, director of student services, spoke before the city council concerning an update with the bus.

Sigee added the bus is for any child in Orange County.

Mayor Larry Spears Jr, thanked her and the school district for all they do for the kids.

“Everyday children go without food,” Spears said. “Without helping our kids, there is no future.” 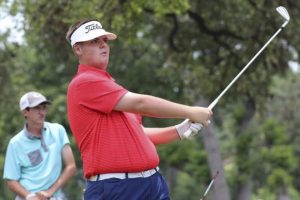 One area student, Jack Burke, was recognized for his success by having Tuesday, July 9, declared Jack Burke Day in Orange.

A proclamation, read by Spears, read:

The great success of Jack Burke, who will be a Junior at Little Cypress – Mauriceville High School, is an outstanding example of the importance of the qualities of discipline and hard work instilled in the students of the district; and

WHEREAS Jack has had a successful road to winning the 4A Golf State Championship on May 20-21, 2019 at Plum Creek Golf Course in Kyle, Texas. Jack shot a – 1 under 71-70 for the two-day tournament and won by two shots; and

WHEREAS he also won the 22-4A District Championship, 2 years in a row and the 4A Region 111 Regional Championship; and

WHEREAS this was a clean sweep for him this year winning all 3 titles; and

WHEREAS Jack won 8 of 11 high school tournaments and finished runner-up twice in 2019; and

WHEREAS he has exemptions into the Texas Junior Am, the Texas State Match-Play and the George Hannon Invitational at the University of Texas; and

WHEREAS Jack is currently ranked 5th in Texas and 54th Nationally by the Junior Golf scoreboard (Class of 2021);

WHEREAS the Citizens of Orange respect and appreciate the dedication and commitment of Jack Burke, his coaches, parents and teachers on his successful achievements in golf through his high school years; and

WHEREAS this proclamation shall serve as a notice for today and a reminder for tomorrow that the citizens of Orange, Texas in 2019 have recognized a very special individual for his OUTSTANDING achievements this year.