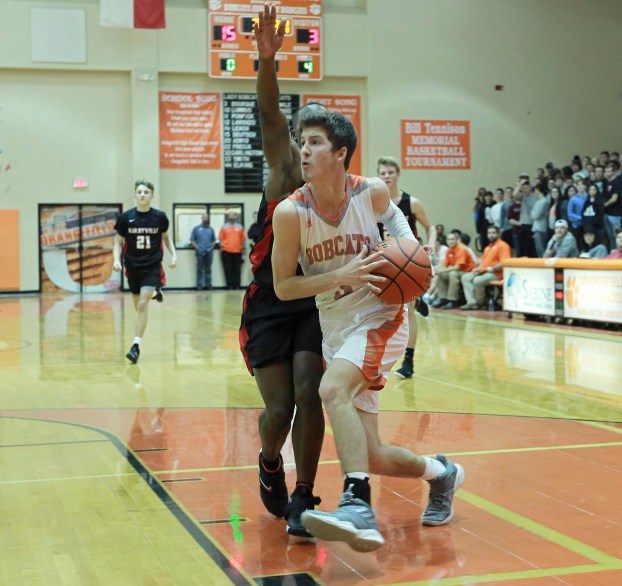 Van Wade/Orange Leader Orangefield’s Kaiden DuBose goes in on a nice drive against Kirbyville last season. The Bobcat basketball team advanced to the third round of the playoffs for the first time in school history and set a school record for wins.

The Orangefield athletic program finished tied for 24th overall in the Class 3A standings while Sabine pass was tied for 21st in the 2A standings.

Southlake Carroll returned to the top of its class in Conference 6A, winning its seventh overall UIL Lone Star Cup. The Dragons won state championships in girls and boys swimming & diving, girls soccer and baseball, and placed teams in the top five at state in girls and boys cross country, girls golf and spirit. The seventh Cup victory places the Dragons in a tie for third-most UIL Lone Star Cup wins.

In Conference 5A, Dallas Highland Park extended its lead of the most all-time UIL Lone Star Cup victories with its 11thwin. The Scots earned 124 points (tied with Argyle for most of any school in 2018-19) with state championships in football, girls soccer, boys golf and team tennis. Dallas Highland Park also had state bronze medal winners in academics, boys wrestling and boys swimming & diving.

Argyle extended its record streak by earning its eighth consecutive UIL Lone Star Cup victory. The Conference 4A winner took home state championships in academics, girls basketball and baseball, and earned state runners-up in marching band and boys golf. The win gives the Eagles a total of 10 Cup victories, which is the second most all-time.

Brock went back-to-back, winning its second consecutive UIL Lone Star Cup in Conference 3A. The Eagles were state silver medalists in boys basketball, state semifinalists in softball and made deep playoff runs in football, volleyball, girls basketball and baseball. This is the third time in school history that Brock has won back-to-back UIL Lone Star Cups (2009-10, 2015-16, 2018-19).

Mason captured its second UIL Lone Star Cup victory with a school-record 76 points in Conference 2A. The Punchers were state champions in football, state semifinalists in girls basketball and earned points for the most match wins at state tennis. Mason also earned points in academics by winning district, region and placing fifth at state.

The UIL Lone Star Cup recognizes six high schools (one in each of the six UIL conferences) based on their overall team achievement in a variety of sanctioned academic, athletic and music championships. All UIL member high schools in good standing are included for contention for the UIL Lone Star Cup. Trophy presentations will take place in the fall at events chosen by the winning schools.

Below are the Top 10 schools along with Sotheast Texas schools in the Top 25 in each conference for this year’s UIL Lone Star Cup Standings: